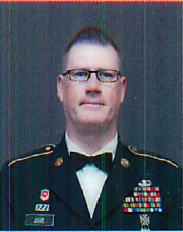 The 2022 Memorial Stand Down event is scheduled for Friday, March 18. This most special event is planned in honor and memory of an outstanding hero, Charles A. Judge, Jr. SFC Judge, a native of Landrum, South Carolina, served for 21 years in the SC Army National Guard, including a tour of duty in Iraq.

Charles was very active in Spartanburg and its contiguous counties. He served as Logistics Coordinator of four past Stand Down events. His passion and covenant to Stand Down was relentless. He was a key leader in the growing number of veterans served each year and the outstanding outcomes that resulted from his diligent work. He effectively sought every opportunity for improvement and expansion at this event. One of his main goals was to make life better and brighter for each and every veteran he encountered..

Charles was tragically killed on July 24, 2016, as he nobly defended a young woman escaping violence. He sacrificed his life to fulfill his ultimate duty to serve and protect. The 2022 Stand Down event is a fitting tribute to his undeniable valor, true heroism and his life’s service to all veterans.

Please consider supporting and/or participating in the SFC Charles A. Judge Jr Memorial Stand Down. Join the many pst Stand Down leaders and countless others in this collective effort to honor Charles, and to serve all those veterans in need that he so dearly and deeply loved.