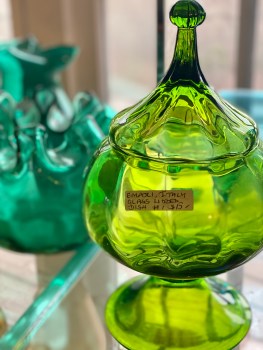 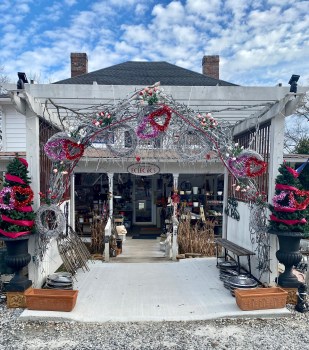 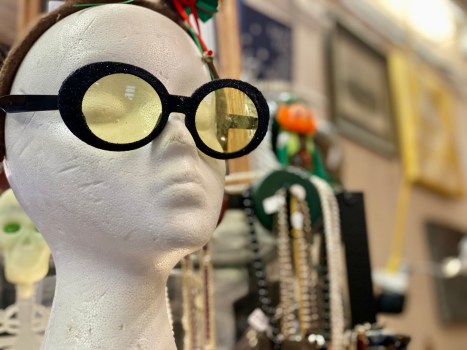 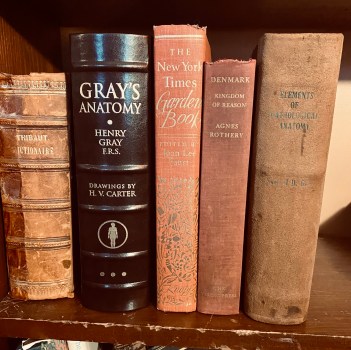 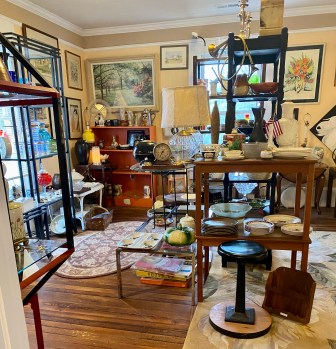 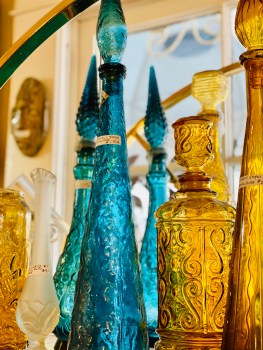 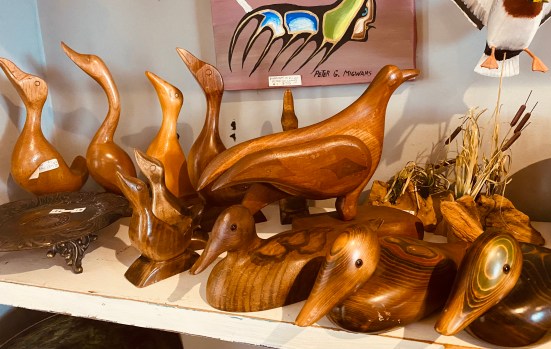 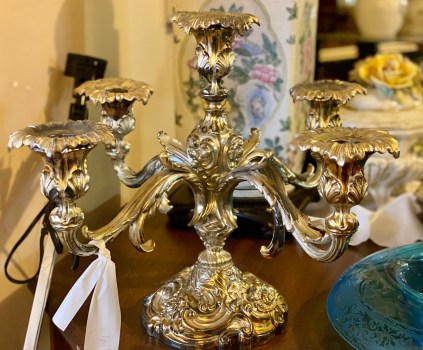 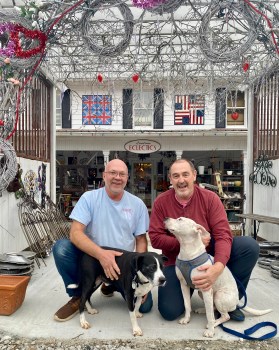 SPEND AN AFTERNOON AT LANDRUM ECLECTICS

When you arrive at Landrum Eclectics, you’ll be happily greeted by owners John and Wayne, and the adorable Shop Dog Welcoming Committee, Buster and Iggy. Nestled on two acres right off of Highway 14 in a revived 1920’s farmhouse, you’ll find Landrum Eclectics has everything you need for a well-appointed home. Customers can relax and peruse rooms filled with vintage jewelry, works of art, books, and an extensive collection of decorative glass objects and home décor in every style. Landrum Eclectics is an established destination for any visitor to the area.

Owner John Dobson is from The Isle of Wight, off the south coast of England. His granddad had always dabbled in the antique business and John enjoyed it as well.

As a young adult, John worked for a bank that was next door to an auction house. When he discovered this, he went to his manager at the bank and worked out a deal where he could attend the auction every Friday afternoon and not have to return to work. So, John skipped his morning and afternoon tea breaks and his lunch every Friday, leaving at 2 p.m. to go find treasures at the auction.

“I had very little money, but what I learned at that auction house in England is basically what we have always done since we’ve been in the business here, and prior to that as well: Look through all the boxes and don’t leave anything unturned because I found treasure under those tables. Too many of the real antique dealers were too proud to get on their knees and dig in a box. Our business name is actually “Digging Dogs” not because we have two dogs but because we dig through boxes. Once, a German lady who was an antique dealer said “Oh! All I ever see is your bottoms! You’re like digging dogs!” So, we named our LLC “Digging Dogs,” he laughs.

John has been here in the U.S. for 33 years. He started off in California where he worked for his sister and brother-in-law at their ski business, and later on he ran a surf shop in Santa Cruz for 13 years before moving to our area.

John started his antique business on eBay and ran it that way until 2010. John and Wayne met in 2008, and later on, Wayne and his mother convinced John to open up two small booths at the Old Mill Market in Tryon, which became very successful. “At that point, it made me think if I could have a store of my own then that would be the goal,” he says.

Wayne was ready for a change too. Born and raised in Landrum, he along with his mom and dad had extensive experience in the junk business. He also has years of experience in the restaurant business. Wayne started working at the Tab’s Flea Market Snack Bar at the young age of 12. He also owned his own restaurant in Gowensville for 5 years and had a lot of business management experience. When the company he had most recently been working for sold to another company with a completely different corporate culture, the timing was perfect for John and Wayne to open their store as it is known today.

Wayne’s father Bobby Levister also had a love for antiques. In fact, he and a business partner opened up the Old Mill Market Square in Tryon. Mr. Levister was most interested in locally made household pottery, such as churns and jugs, while Wayne is more drawn to art pottery. He handles all the seasonal decoration of the store and he and John work together on the arranging of the items in each room of the store.

Most recently, they are upgrading the deck out back to expand the business, to house more of the outdoor décor that they sell.

John’s tennis partner, a builder and construction professional, let him know about the property where the business is located now. He knew John had experience opening stores starting from scratch, so he asked him to come look at the property he had bought from the Howard family in 2005.  He’d had his team rehabilitate it intermittently for 5 years, as a way to provide more working hours to his construction staff when business was slow. When John saw the house, he knew that THIS was his shop. At the time, he didn’t realize how busy Landrum would become but the decision paid off in spades.

“Our success goes completely hand-in-hand with the success of Landrum, which started to grow from that point. At that time, Linda Fitzgerald-Howard, then the owner of Southern Delights & More, and Mary Wolters, then the owner of The Red Horse Inn, put Landrum on the map. They were so responsible for the growth that happened from 2010 onward. The City of Landrum got on board with it too, putting billboards out on I-26 near both Saluda and Campobello, and paid for all six of the Landrum Antique shops’ ads in an I-95/I-26 Antique Guide publication, for two years,” John says.

Linda was also frequently a guest on WSPA’s morning show, further promoting all that Landrum has to offer. Mary was able to advertise The Red Horse Inn in The New York Times Sunday Magazine, providing nation-wide visibility, bringing in visitors from all over the country.

John and Wayne thank the people of Landrum, and all the visitors from near, far and wide for all their support since the beginning of their business, but especially in the last two years while times have been tough for everyone. If you are visiting the area, make sure to add Landrum Eclectics to your itinerary.