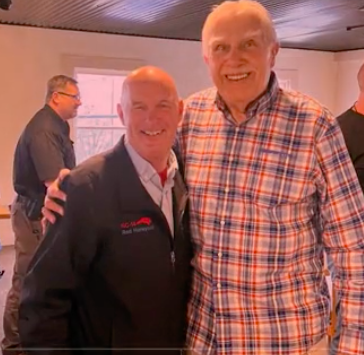 The race to reelect or replace Republican Congressman Madison Cawthorn took some new twists this past week, and with just a little over two months to the May 17th primary, area voters are guaranteed an unusual, if not wild, primary season.

On Monday, Feb. 28, Rep. Cawthorn filed his statement of candidacy for the 11th congressional district which includes Polk, marking a return to the district he left in December. His surprise district hop last year caused shock waves in statewide politics.

At the noon filing deadline on Friday, March 4, new names appeared on both the Republican and Democratic tickets for Congress, and others dropped off.

By Friday afternoon, a federal judge at the US District Court for the Eastern District of North Carolina handed Cawthorn a legal victory in his bid to stop the North Carolina State Board of Elections from pursuing a candidacy challenge investigation as requested by 13 voters, one of whom is a Polk resident.

The challenge cited Section 3 of the 14th Amendment of the Constitution known as the insurrection and rebellion clause and asserted that Cawthorn should be barred from holding office due to his participation in the events of January 6, 2021.

Cawthorn’s office scheduled a Hendersonville press conference to mark the victory and abruptly canceled it Saturday. No announcement was made over the weekend about whether the decision will be appealed to the Fourth Circuit Court of Appeals.

More twists and turns than a snake with an itch

During the state’s redistricting process, in Nov. 2021 District 11 was briefly renamed District 14 and slightly altered by shedding Polk, western Rutherford and McDowell counties east into a newly created District 13 which stretched to the western Charlotte suburbs. Cawthorn, less than a year into his first term at that point, filed to run in the new 13th district in December, a district in which he did not live.

By Feb. 23, however, after multiple revisions to the district maps and a court fight, District 14 was returned to its original District 11 nomenclature and composition, minus Mitchell and Avery Counties. The new 13th district was reconfigured further east, and on Feb. 28, Cawthorn filed the paperwork with the Federal Election Commission to leave the 13th and return to the 11th, where he does reside.

“I am excited to run for reelection in North Carolina’s newly solidified 11th congressional district and represent nearly all of my current constituents in the 118th Congress,” Cawthorn stated in a press release last Monday.

Cawthorn faces seven Republican challengers, some who entered the race before his jump to the 13th district and some who joined after he left. There are also six Democrats and one Libertarian vying for his seat.

Rod Honeycutt, a 37-year Army veteran from Buncombe County, is running a “Boots on the Ground” themed campaign. He visited Columbus and Tryon on Feb. 25 and met with business owners, the sheriff, county commissioners and others.

Another veteran in the mix is Wendy Nevarez, mother of four who spent 11 years in the Navy. She is a vocal critic of Rep. Cawthorn, saying the party needs to rid itself of “self-promoting celebrities” and “end toxic tribalism.”

Bringing a business owner’s perspective, Bruce O’Connell, owner of the Pisgah Inn on the Blue Ridge Parkway, says he’ll commit to only three terms in Congress and donate his congressman’s salary to nonprofits. O’Connell loaned his campaign $1,000,000.

“I welcome all candidates – old and new – to the NC-11 race. I stand firm in my unwavering commitment to this district. I would never place the people of Charlotte over the people of WNC,” Edwards tweeted Friday in reference to Cawthorn returning to the 11th from the district that would have covered the Charlotte suburbs. Edwards has loaned his campaign $250,000.

Like Cawthorn, Michele Woodhouse, former GOP district chairwoman, says she is running on an America First agenda. According to her campaign website, she says that Cawthorn endorsed her when he left the 11th to run in the 13th , and campaign finance filings show he donated to her. She announced last Monday that she is “undeterred” by his return to compete against her.

With a background in social work and counseling, Kristie Sluder from Graham County had been campaigning for several months but made it official on Friday with her filing.

Rounding out the list is Matthew Burril, a financial advisor for 35 years, with service on the Asheville Buncombe Economic Development Coalition and the Greater Asheville Regional Airport Authority.

The Bulletin made multiple attempts to reach Cawthorn’s spokesman for comments on the large field of Republican primary challengers, whether Cawthorn would participate in a debate March 26 at Blue Ridge Community College sponsored by the Henderson County GOP, and whether Cawthorn would seek endorsements from Polk’s commissioners who had supported his 2020 race, with no response.

Iraq War veteran Josh Remillard, who had jumped to the 13th district to chase Cawthorn, posted Friday that he was ending his Congressional bid, and would instead compete for North Carolina House District 118 to represent Haywood and Madison counties. He endorsed Jasmine Beach-Ferrara, Buncombe County commissioner who leads the Democrats in fundraising with $1,187,096 in contributions.

“While our campaign for Congress has ended, it is not the end of our movement to stand up to the Radical Right. I believe that we must put Democracy first, and protect our veterans and working families,” Remillard tweeted.

“I got into this race because I saw an overwhelming absence of leadership,” Gash said. “I’m truly grateful for the wisdom, guidance, and encouragement I’ve received this past year from Democrats and Republicans alike eager for a return to accountable, responsive leadership in Western North Carolina.” Gash did not endorse any of the other Democratic candidates, but pledged support for whoever voters selected in the primary.

The race for the U.S. Senate seat occupied by retiring Republican Senator Richard Burr is a crowded field with 14 Republicans, 11 Democrats, including Chrelle Booker of Columbus, and one Libertarian.

Two Republicans, incumbent Jake Johnson and David Rogers, will face off in the primary for NC House District 113. The winner will be unopposed in the general election this fall.

Democratic and Republican candidates for NC Senate District 48 are running unopposed and include Stephanie Justice of Columbus and Tim Moffitt of Hendersonville, respectively.

Two Republicans, incumbent Tim Wright and challenger Daniel Elliott, will face off in the sheriff’s race primary. The winner will be unopposed in the general election this fall.