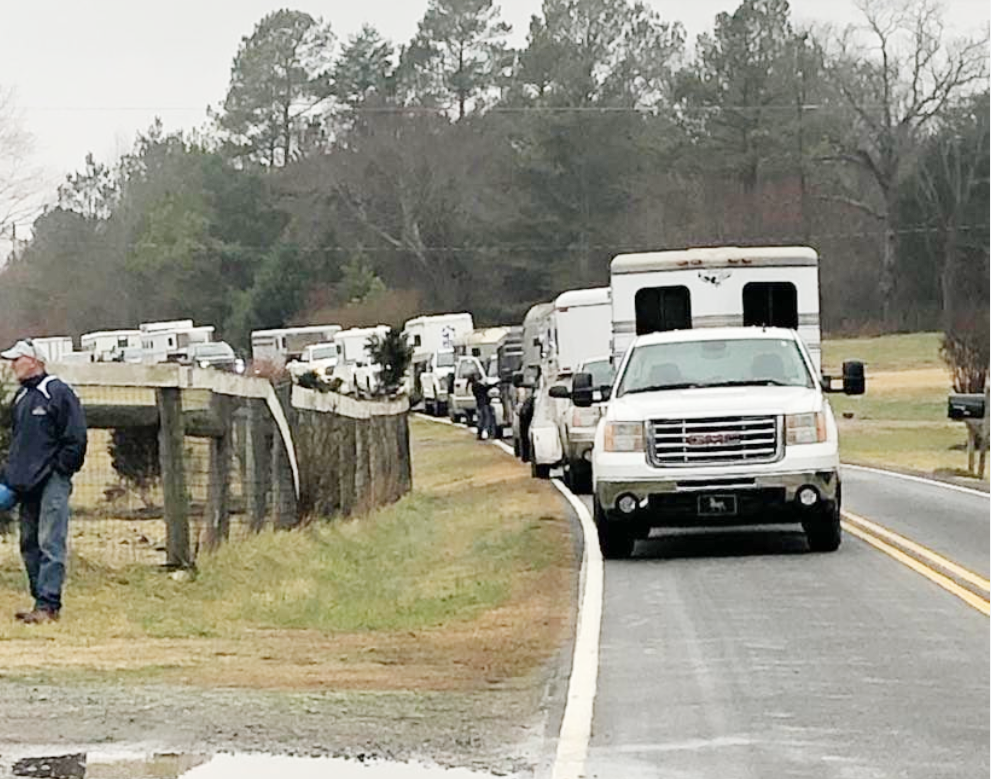 Authorities arrested a Rutherford County woman last week on animal cruelty charges, and with the aid of Polk County Animal Control and a team of medical and rescue professionals, 23 horses, as well as several goats and sheep, were removed.

One pony and a horse had to be euthanized because they could not be saved.

With animal control authorities from both counties working together, a caravan of 15 trucks pulling horse trailers arrived at Paws Ranch in Bostic last Thursday to begin the 10-hour process.

Veterinarians from both counties as well as the Polk Equine Emergency Rescue team also were involved.

Delores Hanser, 63, was charged with 11 counts of animal cruelty as well as improper burial. She posted a $10,000 bond and was released. The charges are misdemeanors.

Many of the horses taken away had visible signs of malnourishment and injuries. The arrest and seizure came after repeated complaints to the Rutherford County sheriff’s office and allegations that animals at the farm located at 330 Walls Church Road were not receiving adequate food and medical care. Until recently, Hanser operated Paws Ranch as an equine rescue, obtaining horses from kill pens or owner surrenders and raising money online for their care.

Meanwhile, medical and nutritional treatments were begun almost immediately in an effort to save the animals. They were taken to farms and rescue facilities in the region, including The Sanctuary at Red Bell Run in Green Creek which took in five equines.

“This is one of the worst cases of animal neglect I have ever seen, and I’ve been doing this all of my life,” said Mary Adams, who owns and operates Red Bell Run. “It’s just horrific.”

The costs for medical and nutritional needs will easily total thousands of dollars for each animal, and some still might not survive.

Volunteers at the scene reported seeing horse skeletons, with some horses lying on the ground.

“We are incredibly thankful to the teams who came together to rescue these animals, but the reality is that there is not a bias for action to prevent animal neglect and abuse in Rutherford County, and animals are suffering because of it,” said Allison Bowling, a well-known rescuer in Winston-Salem, N.C.

“Kat did a great job putting this together, and when she asked me for help, I said absolutely. We got all the organizations together and made it happen. It takes a village,” Lovelace said.

Meanwhile, the Animal Welfare Alliance of Rutherford (AWAR) is being created to develop a united front against animal cruelty in that county. Paola Hayes, a Rutherford County farmer living in the Green Hill community, is heading up the group. Concerned citizens can find the group on Facebook.