Life in Our Foothills 2022 – Margaret Curtis, Visual Artist and Painter 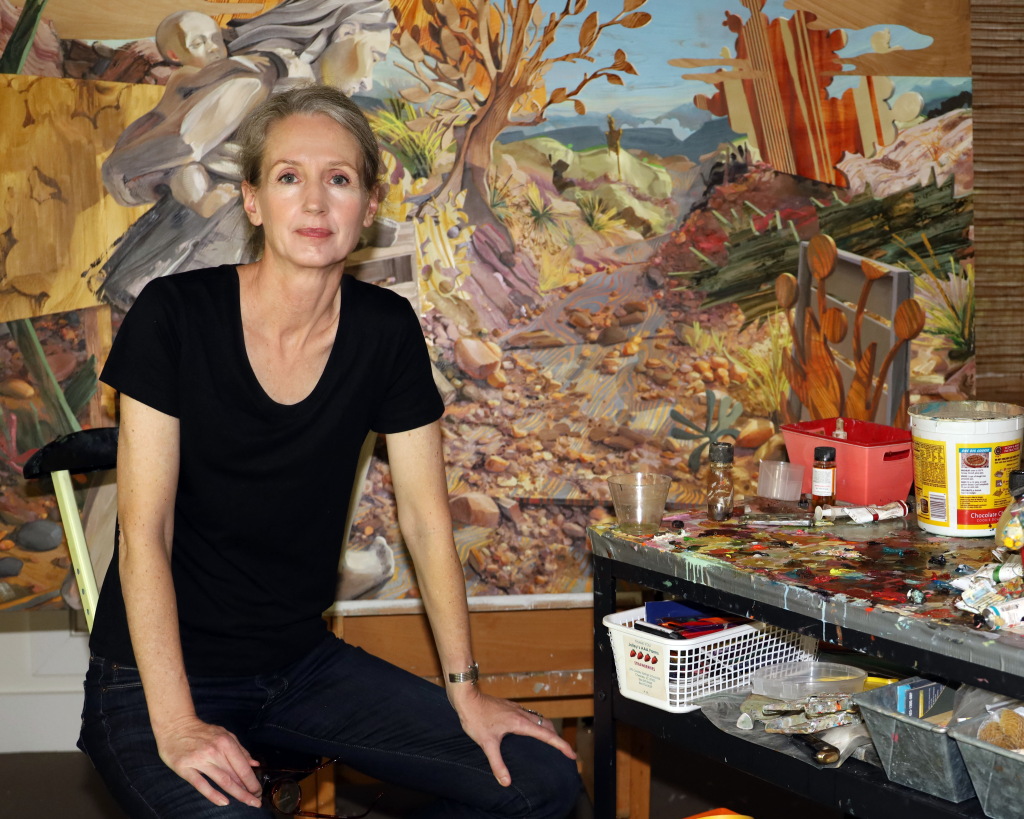 The Unconventional Process of Creativity

Few people know the lengths an artist will go to find the right tools to create their work. As a matter of fact, the tools and process themselves can be just as creative as the finished work.

When Margaret Curtis first started out as a young painter in New York, her implements of choice were cake decorating tools. Recently she’s also used cleaning gloves and a balloon to create ice shapes and study light. The result of that experiment is her 2019 painting “The Ice Sculpture.”

Through the use of unconventional tools, her finished work isn’t always what she originally had in mind when she started. In many cases, the process itself takes over and ultimately determines the finished piece.

“I’ve painted enough to know that light reflection and shadows are often very counterintuitive. I knew something as complex as a whole monster figure made of ice would be a really complicated thing to paint. So, I decided to build my own ice sculpture body model. I made a little red house out of construction paper, went out in my driveway and took a bunch of photographs. Over and over, the house is refracted through his body and I love that as a metaphor,” Margaret says. “It’s an image of a monstrous ice sculpture melting in the sun. Behind it is a little red ranch house. He’s very seductive. He’s got all the reflections of the house throughout his body and there is a mother and several children trying to keep him from melting,” Margaret says.

When creating her art, Margaret says “I’m really thinking about how our human psychology and minds create our family structures, our intimate relationships and our society as well.”

Raised in Tennessee, Margaret attended college at Duke. She did not major in art, but finished all her course requirements early and did what she wanted during her senior year. “So, I just started taking art classes. I really loved it. From there I went to the Atlanta College of Art because I knew I didn’t have enough of a portfolio or the experience to apply for an MFA. So, I got my BFA from Atlanta, then in my early twenties, I got a really wonderful fellowship to Yale Summer School of Art and Music in Connecticut, which was hugely formative for me.” The program was intense, but the teachers there instilled many valuable self-critiquing skills.

The program included 30 students from the U.S. and abroad. They brought in really important New York artists at the time, like Ross Bleckner and Louise Fishman, to critique the students’ work. At that point, Margaret started taking herself a little more seriously in terms of art-making. Today, she still has close friendships with some of her fellow students from the program.

After the program was over, the idealism of youth collided with reality.

“I had a lot of anger when I left. The program was very specific in how it was structured, and it wasn’t kind. Criticism these days, even if it’s hard to hear, is delivered more constructively. We all left a little bit blindsided. I think their whole philosophy was to break us all down and build us back up. I just moved to New York City after that and I said I’m going to give myself five years, sink or swim. A lot of the work I was making early on, really was a reaction to the Yale summer program. I was so mad and I just thought, what is the most obnoxious thing that I could do that would be completely contrary to what my teachers were trying to teach me, something they would never take seriously.” So, she started using cake decorating tools and created floral, frilly, highly decorative paintings.

Born out of that rebellion, she quickly became the hip young thing in New York City, for a number of years. She got her first big break in 1993 through Marcia Tucker, the first female curator at The Whitney Museum of American Art, when Tucker opened her own museum.

An artist in any creative field often becomes so as a way to make some sense of competing ideas in their mind and as a means to express their experiences, thoughts and feelings. Often the finished work is quite disruptive or even controversial.

“Portrait of My Anxiety” (2021) is about someone literally tying themselves up in knots worrying about the challenges and difficulties we all face in today’s world. “I try to keep my work complex, and I try to keep the reading of it very open, because people do bring their own experience into the viewing process and that’s great,” she says.

Margaret also says “I don’t really believe in style. My paintings will take whatever form they need to take in order to express the idea I’m trying to get across. Sometimes I utilize realistic, Trompe-l’oeil style and faux finishing,” skillsets she developed while first working in New York. “Some of them are much more expressionistic. The Ice Sculpture is not at all what I was thinking it would look like in my mind, but through the process, it created itself.”

“There are a lot of mistaken ideas that people have about the artistic process. They think you just paint out of your head. But our brains don’t really work like that. There are all sorts of things that happen when you really get past what your brain is telling you that you should see and start looking at what is actually in front of you. That’s where the magic is. So, you have to be engaged with the physical world in order to really understand that. I’m a big believer that artists need to give themselves as much information as they can about what they’re working with,” Margaret says.

Even the paint itself can transform what the finished product looks like. “I love paint and my work is highly layered, almost geologically. There’s a lot of relief on the canvas.” Cake decorating tools are used to spread out thick globs of paint, and paint is woven, like basketweave icing.

Margaret and her husband moved to Tryon from New York City in 2008, to be closer to medical care for their oldest son. She says about Tryon, “This is the other side of the mountains that I grew up in, in Tennessee, and it reminds me very much of my home town. We were impressed that a town this size had a theater with a film society, a coffee shop, five bookstores at that time, and a contemporary art space. Tryon has a lot of culture for a small place,” Margaret says.

After moving here, and a six year break, she had to rebuild her career from scratch. “Coming here and just starting all over again, seeing that my work is still meaningful and having the work be in demand, doing that twice, I feel so much more confident about what I’m doing now. I want the slow build, I don’t want the ‘hip-thing’,” Margaret says. There are a number of working artists in the Tryon community and she really appreciates their companionship.

Recently the Joan Mitchell Foundation awarded Margaret a fellowship.  Joan Mitchell was part of the first generation of Abstractionists like Jackson Pollock and Willem de Kooning. She and the other female Abstract Expressionist painters of that era were not taken as seriously, and she ended up moving to Paris. “She’s taken seriously now but, in her day and age it was hard for them to get shows, and hard for them to get decent non-biased criticism,” Margaret says. The foundation that Mitchell started was specifically to help living and working artists overcome any obstacles preventing them to be able to create art, and generously supports those who are awarded. An artist must be nominated to apply. Margaret was nominated the first time and didn’t get it, but was re-nominated this time around and selected. “I was thrilled that someone on the national level put my name in the hat,” Margaret says.

As a result of the award, she is currently expanding her art studio and says that emotionally, this has really helped unify the beginning of her career with her most recent work.