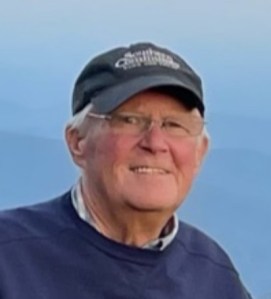 Colfax, NC– Dr. Nelson Hague “Chip” Leonard, 76, of Colfax, passed away Sunday, January 30, 2022, at his residence surrounded by his family.
A memorial service will be held at 4 pm Sunday, February 6, 2022, at First Christian Church in Kernersville. The family will receive friends from 2:30 until 4 pm on Sunday at the church before the service.
Dr. Leonard was born June 13, 1945, in Newport News, Virginia. He was the first child of Ernest Nelson Leonard, who was serving in World War II, and Edna Hague Leonard. After the war, the Leonard’s returned to their small mountain town of Tryon, NC, where Chip grew up. He attended Virginia Polytechnical Institute and graduated from the UNC-ChapelHill School of Dentistry in 1970. After serving two years in the United States Air Force, Dr. Leonard moved his family to Kernersville and established his dental practice with the help of several generous Kernersville families. He spent the next 48 years serving patients, many of whom now represent multiple family generations. In 2018, Dr. Greg Stahr joined the practice, which was renamed Kernersville Family Dentistry. Dr. Leonard quit working in early 2020 during the initial Covid-19 shutdown.
Chip was a member of Bunker Hill United Methodist Church, where he taught Sunday School and played the guitar during worship. He participated on numerous building teams in Latin and South America through the United Methodist Conference and served through many local ministries. He loved his family, his patients, his cars, Carolina basketball, and the beach.
In addition to his parents, he was preceded in death by his brother and sister-in-law, Alan and Susan Leonard. Dr. Leonard is survived by his wife, Jane Dunn Leonard of the home; his children, Erin Leonard Richardson and husband Dan of Greensboro, Joshua Hague Leonard and wife Kristin of Oceanside, CA, and Daniel Osborne Leonard of Greensboro; his brother, Robert Carmichael Leonard and wife Bland of Saluda, NC; six grandchildren, two step-grandchildren, and one great-grandchild.
Please direct memorial contributions to Crisis Control Ministry, Inc., 431 W. Bodenhamer Street, Kernersville, NC 27284.
The family wishes to thank First Christian Church and Boone & Cooke, Inc. Funeral Home & Crematory for their help in honoring the life of Dr. Leonard.