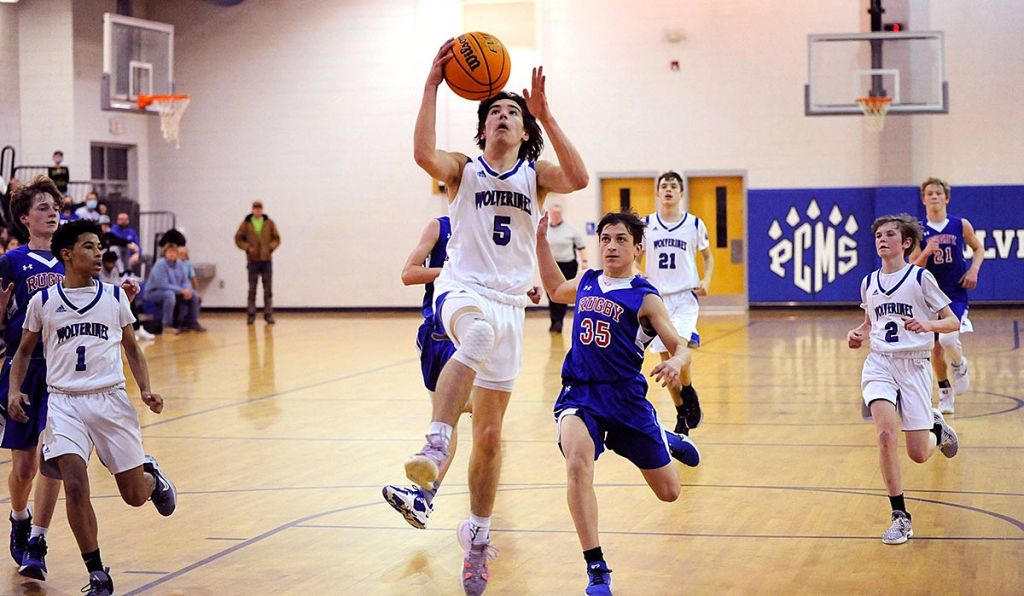 Rugby Middle’s Duke Nitcher hit a long 3-pointer to open the game and the Raiders never trailed, clicking offensively and disrupting Polk’s offense in a 56-36 victory.

The Raiders (5-5, 4-5) hit six 3-pointers and looked well-coached as usual under head coach Brad Swayngim in avenging a loss earlier this season to the Wolverines (4-8, 3-7). Rugby built a 21-8 lead at the end of the first period and a 31-10 advantage at the half.

Led by an eighth grade class that was honored prior to the game, this group of Wolverines has shown fight and determination throughout the season. That spirit has led to both close wins and close losses, a break here or there perhaps translating to more wins on the scoresheet.

The Wolverines trailed 9-2 in the first period Thursday, but quickly battled back to within three. They were down 20-plus points early in the third period, but again fought back, bringing a packed home stands to life with a surge that forced Rugby to call a timeout to stop Polk’s momentum.

That charge came early in the final quarter and included a play, a memory, that will linger well into the offseason. Picking up a loose ball in Rugby’s end of the court, Polk’s Nolan Simpson charged upcourt, dribbling through traffic as he eyed both the Raider defense and teammate Aaron Jackson sprinting to his left.

As Simpson neared the 3-point line, he ever so casually wrapped a bounce pass behind his back to Jackson, who took the pass in stride, drove in for a layup and drew a foul in the process.

Jackson hit that free throw, then turned a steal into another layup and suddenly Polk trailed just 43-29 with 3:47 remaining.

Rugby took its timeout at that moment. The Wolverines nearly forced another turnover after the break, but instead Rugby’s Zane McCraw delivered a three-point play, a layup and free throw, and the Raiders would never lead by less than 16 the rest of the game.

The Wolverines, though, continued to battle until the final buzzer sounded, just as they’ve done all season, just as no doubt they’ll do next season at Polk County High School.

And that, no doubt, is an ending worth celebrating.