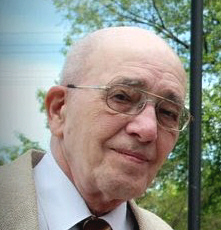 Owensboro, KY– Richard “Dick” Eldon Estep, 80, of Owensboro, Kentucky passed away Monday, January 24, 2022, at his home with his family by his side. The Corning, New York native was born July 1, 1941, to the late Eldon Larue Estep and Hazel Eleanor Strope Estep. Dick graduated from Painted Post High School (class of 1959) then served in the U.S. Navy from 1961-1981. His naval duties took him to Japan (1965-1968) and Virginia Beach (1970-1981) where he was an Aviation Fire Control Technician. After military service, Dick received a Computer Engineering degree in 1983 from Isothermal Community College which led him to a vocation as a Computer Programmer. Dick was an avid fan of the New York Yankees and NASCAR.

There will be a private family service followed by a memorial service in Corning, New York in June of 2022. Care by Glenn Funeral Home and Crematory.

Expressions of sympathy may take the form of contributions to Wounded Warrior Project, P.O. Box 758516, Topeka, Kansas 66675-8516, or www.woundedwarriorproject.org.

Memories and condolences for the family of Dick Estep may be left at www.glenncares.com.