“I’m going to stop trying to be funny,” I said to my wife.

“No, I’m serious,” I said. “It’s too easy for people to misunderstand and get upset by something that was supposed to be funny.”

“I’m serious, too,” she said. “I meant you’re trying to be VERY funny when you’re just a little bit funny, and maybe not even.”

I thought I was supposed to laugh at that. So I did. Mistake. She was serious.

See how difficult it is?

I know I should leave humor writing or speaking to comics and comedians. Take Pam Stone, for example. She’s a knee-slapping, guffawing hoot to listen to or read. She’s clever.

Now you’re talking. That’s what I want to hear. Unbridled, enthusiastic support. Tell me how much I make you laugh.

On it went. Trying to understand but misunderstanding.

After all, I do know that there are a few areas in which humor, even good humor, flies about as high as a wet hen.

Religion and politics are the two-railed road to Fist City, if you aren’t careful. Don’t joke about “thoughts and prayers,” no matter how trite and meaningless the phrase has been rendered by people who use it to cover everything from the death of a loved one to the suddenly shortened lifespan of the dog caught peeing on the carpet.

Religion has always been a hot receptacle into which one should not poke the wet finger, but politics used to be a topic that could be discussed without having to be armed with anything but an open mind. Sadly, that is no longer the case.

Now I will add to that the sensitive Yankee-Southerner button, since apparently a few of my friends who wisely migrated to this area took umbrage at last week’s raggedy effort to poke fun at the mindset of both sides of the Mason-Dixon Line.

“Try to not be so subtle,” she said. “Even when you think your signals are crystal clear and your heart’s right, ambiguity is the breeding ground for wrong turns.”

So from now on, I’m going to stay with safe topics and leave humor to Pam.

Next week: How to teach Southerners to drive in the snow. 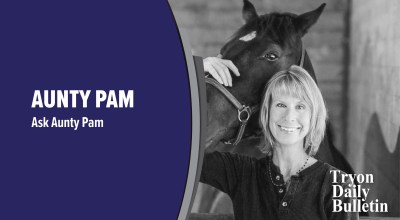 Dinner and a no-show