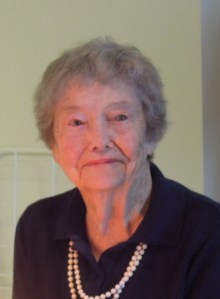 Montpelier, VT– Elizabeth (Betty) Gentry Knowlton died peacefully in Montpelier, Vermont, on December 26, 2021, at Westview Meadows. Elizabeth Bond Gentry was born to Dr. Ernest R. Gentry and Lydia Fuller Gentry on July 14, 1921, at Letterman General Army Hospital in San Francisco. Her father served in the U.S. Army Medical Corps and, as a military dependent, her childhood was peripatetic, living in the Panama Canal Zone, Washington, DC, New York City, and Oklahoma.  She graduated from the Madeira School in McLean, VA, and later from Vassar College in 1942 with a degree in Greek and Latin. She was an avid scholar of the Classics and fascinated by archaeology.
She married Lt. Joseph L.Knowlton, a newly minted Army officer stationed at Fort Sill, OK in 1943. Together they lived on numerous army posts and other assigned locations during his military career, racking up over 40 moves during their marriage through which she maintained a remarkably resilient and positive attitude. During these years her family grew to include sons Joseph, born at West Point, NY, Robert, also born at West Point, and Stephen, born in Washington, DC. Following husband Joseph’s retirement from the military in 1966, Joe and Betty moved to Weston, MA, then relocated to Tryon, NC in 1973. Throughout her life, Betty rarely failed to engage everyone she met with her self-deprecatory wit and amusing and sometimes fractured wordplay.  The family particularly mourns her passing as she is the last of her generation. She is remembered as the pillar of our family and the center of our fun times. She remains a major influence on who we have become. Her hundred years was a life well-lived. But as she remarked perceptively near the end, “Sunt lacrimae rerum et mentem mortalia tangunt.”
Betty was predeceased by her husband and her son Robert (m. Kaye Edwards). She is survived by sons Joseph and Stephen (m. Lindy Biggs), grandchildren Peter (m. Terry), Jeffrey (m. Carla) Christopher, Timothy, and Gregory, and great-grandchildren Lila, Sadie, Miles, and Ellis.