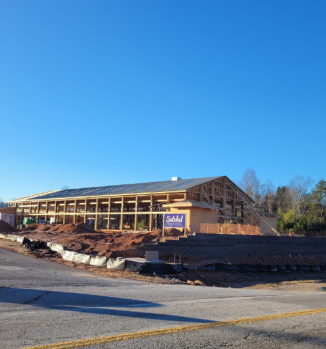 Market still plans to begin in May after completion of building

LANDRUM—The City of Landrum received word recently that the Farmers Market pavilion is behind schedule again.

The new estimated time for substantial completion to be the end of February.

The most recent completion date was scheduled for the end of January and previously last year.

Strong wind gusts caused the roof of the new structure to collapse at the end of November.

The new pavilion is located at the intersection of West Rutherford and South Randolph Streets.

The pavilion will be used for the Farmers Market as well as community events and will be 15,000 square feet and a peach shed, barn style design.

The new building will feature sliding glass windows with quilt patterns that can be closed during the winter months and during inclement weather.

The new pavilion will be able to accommodate approximately 200 people.

City officials say the parking lot is scheduled to be repaved in March 2022.

The project is estimated at $1.8 million.

The February schedule includes to complete the interior finishes on walls and ceilings; interior painting, trim out, the overhead doors and landscaping.