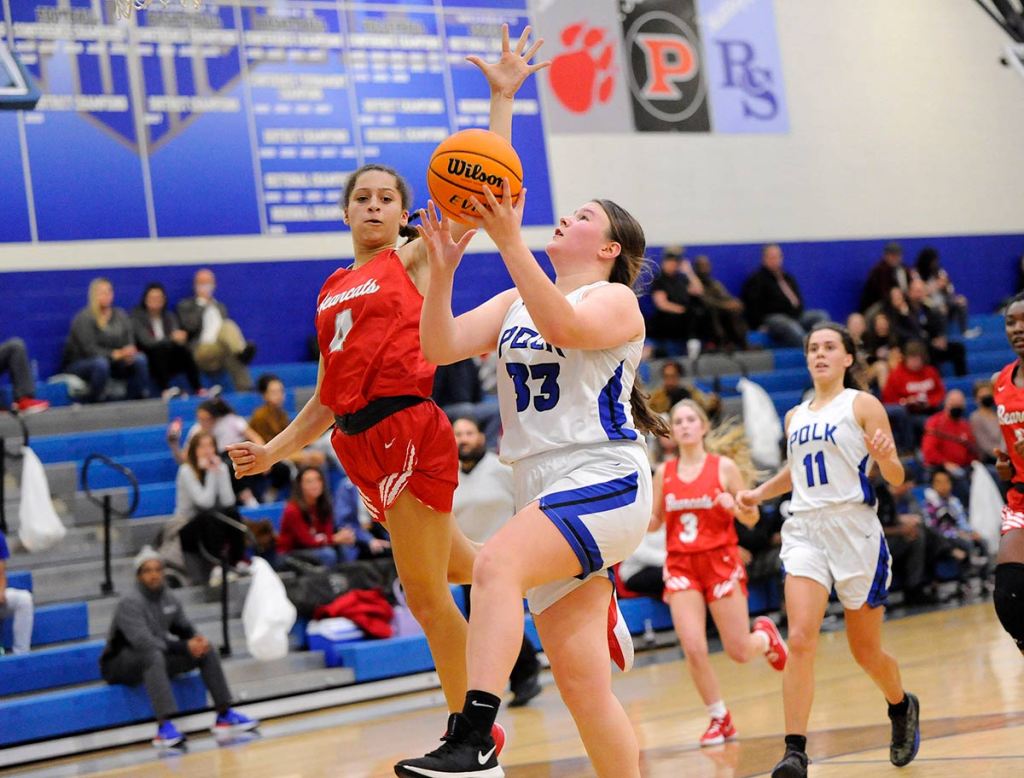 Three quarters in Tuesday evening, score tied, it felt like someone made a decision as to how to break the deadlock between Polk County and Hendersonville.

The two teams shot a combined 33 foul shots in the fourth quarter, 17 for Polk, 16 for Hendersonville. The Wolverines hit five more of their attempts and that led to a 49-41 victory in a Mountain Foothills 7 Conference tussle.

With a JV game also played, Polk County (6-2, 2-0) had just seven varsity players in uniform. By game’s end, one of those had fouled out, and five more had four fouls. It was that kind of night.

But Polk County persevered, hitting 12-of-17 free throws in the final quarter and adding a pair of baskets to subdue the Bearcats (2-8, 0-2).

“This was a great team effort,” said Polk County head coach Brandy Alm. “We made adjustments, we communicated with each other. This was a great way to go into Christmas break.”

Polk held a one-point lead midway through the quarter, but Kylie Lewis and Tori Thompson hit four straight free throws to push the lead to five. Thompson then drove to the baseline and found a wide-open Kiera Littlejohn for a layup and a 44-37 advantage with three minutes remaining.

Hendersonville answered with a basket and had an opportunity to get back to a single-possession game, but India Smith missed all three free throws after being fouled on a 3-point attempt with 1:35 remaining, and Thompson hit 4-of-6 free throws in the final 90 seconds to seal the win.

Olivia Overholt had 13 points to lead Polk County, with Lewis adding 10. Littlejohn had nine points and Thompson had eight, all at the foul line.

“Kiera has never played the three position, and had to put her there tonight at times and she did a phenomenal job,” Alm said. “All of our freshmen stepped up and played well, and our seniors did an incredible job leading and controlling the tempo of the game.”

The Wolverines will return to action on Jan. 4, hosting R-S Central in another conference battle.