District One honors the late board member Gordon Lee 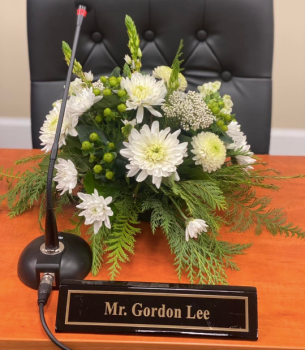 SPARTANBURG COUNTY—Spartanburg County District One Schools honored the life and service of the late Gordon Lee during its board of trustees meeting Monday.

Lee had served a decade on the Spartanburg District 1 School Board of Trustees when he passed away. He was also a former Spartanburg Soil & Water Commissioner.

“Tonight we honored the life and service of Mr. Gordon Lee, who was a valued member of the Spartanburg One Board of Trustees, and a strong advocate for our schools,” stated a release by Spartanburg District One.

Lee was elected to the board of trustees in 2011. The district presented his wife Sheila and children Grayson and Kennedi with a special vase and a resolution in appreciation of his service.

The school system is taking applications to fill the vacancy on the board. The term will be from Feb. 2022-Nov. 2023. Anyone interested in applying can go to https://docs.google.com/…/1FAIpQLSd2VyM37fyNa9…/viewform.