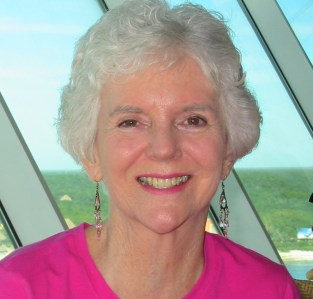 Dr. NinaleeTheresa Fox May Haynie Kinney, known to many as Ninalee Haynie, age 86, died peacefully October 5, 2021.
Ninalee was born and raised in Miami Florida. Her father died when she was 8.  She attended Miami Senior High, then the University of Florida, graduating Phi Beta Kappa. She married Carl May and they had 4 sons. She enrolled at Rutgers University earning a doctorate (E.D.) in 1978 and then opened a psychotherapy practice in Manhattan. She and Carl divorced, and she fell in love with and married Gerald Haynie in 1986, and in 1992 they retired to Connestee Falls in Brevard NC.  They stayed very active, and Ninalee was engaged in local craft clubs and her local Unitarian Universalist congregation. In 2008 they moved to Tryon Estates in Columbus NC, where Gerry unexpectedly died suddenly shortly after. She later met and fell in love with Craig Kinney, and they married in 2010. Several years later, Craig suffered failing health, and Ninalee was faithfully at Craig’s side for several years until his death.
Ninalee had a playful spirit and an extraordinary intellect. She could read a long novel in an hour or two, with a recall of every detail. New York Times Sunday crossword puzzles were routinely conquered. Despite developing some health challenges and slowing down in recent years, her zest for life remained high and her devotion to her family was steadfast.
Ninalee is survived by 4 sons, 6 grandchildren, 2 great-grandchildren, 2 sisters-in-law, and 7 stepchildren and their families.