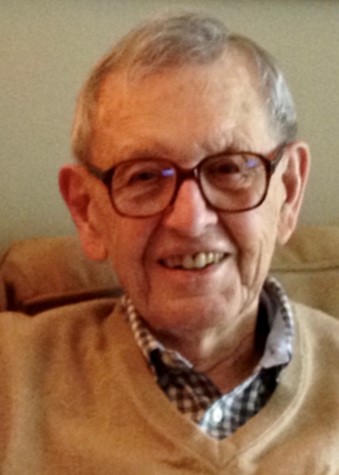 Columbus, NC–Clyde W. Kaericher, 100, passed away suddenly and peacefully on November 24, 2021. Clyde was born on March 24, 1921, in West Salem, Illinois, the second of six sons born to Emmett C. and Alberta L. Kaericher. He grew up in the small farming community during the Great Depression and worked at the family’s general store. He attended the University of Illinois, where he earned his room and board by making beds daily and doing dishes at the rooming house where he lived.

His college education was interrupted when he was drafted into the army in September of 1942 during his junior year. He was commissioned in July of 1943 and served as a Second and First Lieutenant during WWII and during the post-war occupation in Europe until July of 1946. He was stationed in the United States, England, Germany, France and Austria, much of it with the 560th Anti Aircraft Artillery Battalion and subsequently with the 42nd Infantry Division, known as the “Rainbow Division”.

Clyde graduated from the University of Illinois in 1947 and joined Cargill’s management training program in Minneapolis. He met and became engaged to Doris Peters (“Petie”), his beloved wife of 64 years, but was then recalled to active duty for 18 months during the Korean War until September of 1952. He was on assignment in Korea until a few days before they married on August 9, 1952. He completed his service in the Army Reserves in 1954 with the rank of Captain.
Clyde and Petie raised three children together, and moved frequently during his early career. He served in a variety of financial positions with Cargill in Minneapolis; the Honeywell Aeronautical Division and the Honeywell Inertial Guidance Facility in FL; Telex Corporation in St. Paul, MN; and Giannini Controls, subsequently renamed Conrac Corporation, in Duarte California. When Conrac relocated its corporate headquarters to New York City in 1967, Clyde moved his family from California to Stamford, Connecticut. He retired from Conrac in 1987 as Chief Financial Officer, and in 1992, Clyde and Petie retired to Tryon, NC. After many happy years there, they moved to Tryon Estates in Columbus, NC in 2008.

Committee for Hospice of the Carolina Foothills and the Audit Committee for St. Luke’s Hospital. He also volunteered for Habitat for Humanity and was a member of the Tryon Community Chorus. He was a long-time member of the Congregational Church of Tryon.

Clyde had a generous spirit and a hearty, distinctive and frequent laugh. He was a man of great warmth, integrity, intellect, humor and wisdom. He lived independently, continued to drive and to read the Wall Street Journal cover-to-cover until the day of his passing. He was an avid golfer well into his 90s and was a natural born teacher, builder, and a world-class storyteller. He read widely, was interested in countless things and knew a little about just about everything. He was known to spontaneously burst into song.

Clyde left many friends and family, who cherished him and who will miss him deeply. He is survived by two daughters, Susan (Ralph) Carlson of Batavia, IL and Cathleen (James) Condren of Darien, CT; five grandchildren, Eric (Carey) Carlson, Jon Carlson, Kristin Carlson, Daniel (Caroline) Condren and Katherine Condren; and three great grandchildren, Ben, Lucy and Zachary Carlson. He is also survived by his brother, Michael (Dianne) Kaericher of Holland Ohio, and many nieces and nephews. He was predeceased by his loving son John in 1990 and his beloved Petie in 2016. Clyde also left many dear friends, most especially his cherished friend Will Behrends, with whom with whom he enjoyed animated and wide-ranging discussions during their weekly visits. He was truly blessed with a life well-lived and good health until the very end. The family would like to thank the wonderful staff and administration at Tryon Estates, who cared for both Petie and Clyde in so many different ways during their later years.

A celebration of Clyde’s life will take place in early 2022. In lieu of flowers, memorial donations may be made to the Tryon Fine Arts Center, 34 Melrose Avenue, Tryon, NC 28782 or the Tryon Concert Association, PO Box 32, Tryon, NC 28782, both of which meant a great deal to Clyde.
An online guest register is available at www.mcfarlandfuneralchapel.com