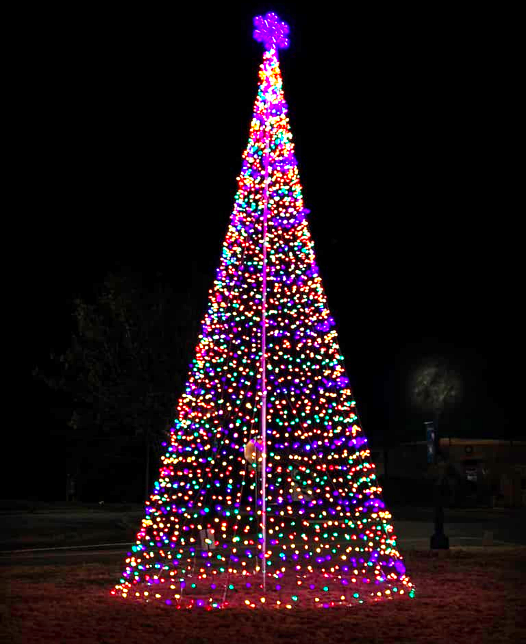 FOOTHILLS—The City of Landrum is the first to kick off the holiday season with a tree-lighting ceremony over the weekend and its stroll and parade scheduled for this Thursday.
Other areas in Polk County had their downtowns decorated by this weekend as well.
Landrum began the holiday activities with a Christmas Tree Lighting Friday night. The city lit a 30-foot tree by the Landrum Depot, with children meeting Santa, hearing Christmas carols, having hot cocoa and cookies and seeing the Elf on the Shelf.
Landrum will also kick off the first parade and stroll this week. The city’s parade and stroll will be held downtown at 6 p.m. on Thursday, Dec. 2.
Then on Friday, Dec. 3, the Town of Tryon will kick off its holiday celebrations with a Christmas Tree Lighting, carriage rides and a Christmas Stroll. Tryon’s tree lighting will begin at 5 p.m. Friday.
Tryon’s Christmas parade will be held downtown at 5 p.m. next Wednesday, Dec. 8.
The Town of Columbus will have its parade and Home Town Christmas this Saturday, Dec. 4. The parade will begin at 4 p.m. downtown and the Home Town Christmas will be held at Stearns Park following the parade at 4:30 p.m. Home Town Christmas will include Santa Claus, Story Time and the lighting of the Christmas Tree, which is scheduled for 5:30 p.m.
The City of Saluda will host a Hometown Christmas on Friday, Dec. 10 from 6-8 p.m. The city invites people to enjoy music, food and strolling around the town. There will also be a toy drive collection and an Ecumenical service at 8 p.m. at McCreery Park.