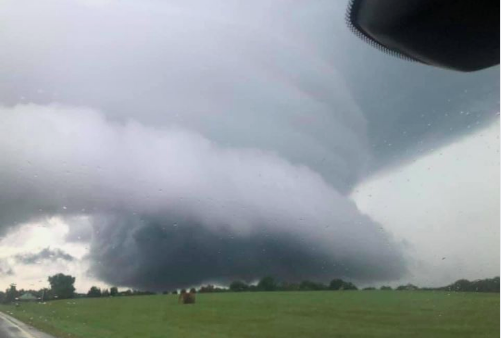 This picture was captured on Tuesday in Gowensville along Highway 14. (Photo by Stacie Wheatley)

Area drenched all week; October is already above normal rainfall

FOOTHILLS—An unusual cloud seen by residents on Tuesday may have been a sign of how the rest of the week was going to go weather-wise.

This week has brought above normal rain, including an official 3.27 inches in Tryon Monday through Thursday, according to the National Weather Service. Other areas have recorded more, with some people saying their rain gauges had measured up to 9 inches, and that was before Friday’s torrential rains.

The normal rainfall in Tryon for October is 1.31 inches, so this week alone has already almost tripled that through just Thursday.

Rains were expected to continue through Friday and some of Saturday, with heavy rains expected at times Friday.

Friends of the band