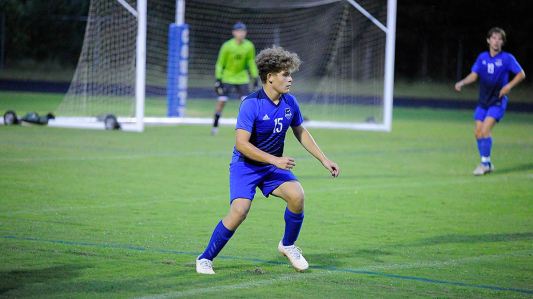 Not even the scattered raindrops that visited Miller Field Monday evening could dampen the smiles on the Polk County sideline.

The Wolverines finally picked up their first win of the season, downing R-S Central 3-1 in a Mountain Foothills 7 Conference match in G.M. Tennant Stadium.

Polk County (1-4-1, 1-2) got two goals from Elliot Whiteside and another steady performance from senior goalkeeper Greyson Ball to end the program’s longest run of matches without a win since a seven-game stretch spanning the 2016 and 2017 seasons.

“I’m glad to see the boys get a win,” said Polk County head coach Josh Trejo. “That should help boost their confidence as we move more into our conference schedule.”

Polk County played without several starters sidelined by non-COVID illnesses, but still grabbed an early lead and kept the Hilltoppers (1-7, 0-2) at bay.

The Wolverines struck first in the 10th minute as defender Braxton Edwards intercepted a pass in Polk’s end of the field, dribbled to midfield and sent through a perfect lead pass that eventually found the foot of Whiteside, who hit a low left-footed drive from the top of the penalty area that slipped inside the right post.

Whiteside struck again in the 11th minute, this time racing for a loose ball deep in the box and again hitting a low left-footed drive that this time beat the R-S goalkeeper inside the left post, giving the Wolverines a two-goal advantage.

R-S Central, though, trimmed that margin in half just before intermission as Trevor Coldren headed in a corner kick in the 39th minute.

It took Polk County just 18 seconds into the second half to regain its two-goal advantage. Jack Smith won a footrace to a ball played into the top of the penalty area, beating a Hilltopper defender and the oncoming goalkeeper and striking a perfect shot into the lower left corner of the net, upping the Wolverine advantage to 3-1.

Ball made certain it remained that way. He turned aside several R-S shots on goal in the second half, including a pair of free kicks from just outside the penalty area, one of those a high curling drive that he had to leap to tip over the crossbar.

Polk County steps out of conference play for two challenges this week, traveling to Owen (7-1) on Wednesday before hosting Hibriten (7-0) on Thursday.

By Andy Rhinehart andy@polksports.com Salisbury’s defense proved as good as advertised – and perhaps then some. The Hornets made certain... read more