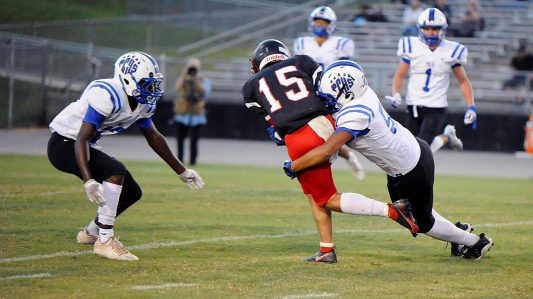 They call them wall games at Polk County, the most special of victories that earn a permanent marker in the Wolverine weight room.

Take winning a debut outing in a brand new conference, especially in dominant fashion – that will earn a spot on the wall every time.

Which is exactly what Polk County did Friday night.

The Wolverines scored on the game’s first play and quite a few of the ones that followed, building a 34-0 halftime advantage that led to a comfortable 41-8 victory over Patton in Morganton.

Save for an injury to junior running back Angus Weaver, very little failed to fall in Polk’s favor in its first Mountain Foothills 7 Conference game. The Wolverines (3-1, 1-0) needed just 39 offensive plays to accumulate their 41 points and scored on each of their first six possessions. Steven Chupp returned the opening kickoff 94 yards for a touchdown, junior quarterback Casey Beiler threw for a career-best 220 yards and four touchdowns and Antonio Simpson caught six passes for 88 yards and two of those scores.

The need for a spot on the weight room wall became evident fairly quickly.

“I’m pleased, I’m proud of the way we came back to work this week,” said Polk County head coach Bruce Ollis of the Wolverines, who were all quarantined for seven days due to COVID-19 protocols. “We got ready with two days of practice to play. Our coaches did an unbelievable job getting us ready.

Weaver suffered an injury to his left hand in the first quarter. Ollis said X-rays would be needed to determine the severity of the injury and whether that will impact Weaver’s availability for next week’s home showdown with Hendersonville.

Patton (0-3, 0-1) also had injuries of concern, forced to line up without starting quarterback Randan Clarke as well as a couple of other starters. The Panthers and head coach Mark Duncan, a former Polk County assistant, certainly could have used the help.

Chupp took the opening kickoff, raced up the middle of the field and was barely touched until celebrating with teammates in the end zone, the score and Isaac Hernandez’ point after giving the Wolverines a 7-0 edge just 13 seconds into the game.

Polk County would continue to score at regular intervals thereafter:

“Maybe I need to make Antonio Simpson a game captain more often,” Ollis said. “He missed the last couple of weeks, but he came back and has been very business-like. I just felt like he was going to play well.

“I thought we threw and caught the ball as well as we have in a long time. Casey, from a confidence standpoint, really upped his game for the rest of the season.”

Polk completed its scoring run on its first drive of the second half, with Beiler hitting Keaundrae Green for a 40-yard catch-and-run to the end zone. Logan Nodine added the extra point.

Beiler and Green also teamed on a long touchdown pass later in the half, only to see that negated by a penalty.