Rep. Cawthorn will not be charged 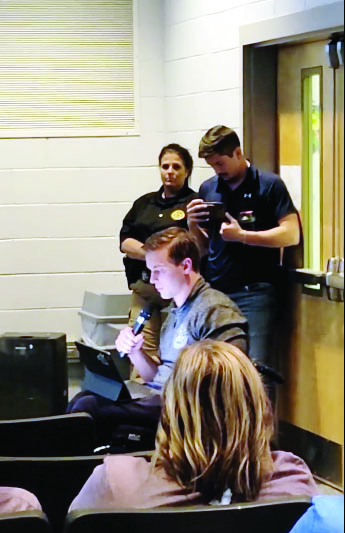 MILL SPRING—U.S. Rep. Madison Cawthorn will not be charged for allegedly bringing a knife to at least one local school board meeting.

The Henderson County Sheriff’s Office said although unacceptable, occasionally a person inadvertently possesses a knife on educational property or other property where such possession is prohibited.

Polk County Sheriff Tim Wright responded to FireMadison.com this week and said he has spoken to attendees of this week’s meeting, including the school board and found no evidence that Cawthorn possessed a weapon at the Polk County Middle School.

“We take the safety and security of our schools, students and citizens very seriously,” Wright said. “If anyone had been seen with a weapon by our deputies they would have taken appropriate actions ranging from a verbal warning to an arrest depending on the situation.”

Wright said if any individual had observed a weapon on someone at the Polk County School Board meeting, he would expect they would have alerted law enforcement, which was present at the meeting. Wright also said had their been proof that Cawthorn possessed a knife at Polk County’s event, he would have been treated the same as any other person in attendance.

“My response to all crimes is based on the law and not on political affiliation and I take offense at any accusations of dereliction of duty and basing it on politics,” Wright said. “Seeing as there were no threats made during the meeting, there was no brandishing of a weapon, no one in attendance, no one in attendance complained, and no one seems to have even noticed if Mr. Cawthorn actually had a knife at the Polk County School Board meeting, I find your concerns rather exaggerated and political nature. I feel as though you are intent on pulling the Polk County Sheriff’s Office into a political debate that does not pertain to us. My job is to protect and to ensure the safety of our students, school staff, administrators and our citizens equally and unbiasedly.

As a parent of two children in Polk County Schools, I take their safety personally and will do everything in my power to protect them, their classmates and everyone else who works within our school system.”

Weapons are prohibited on all school campuses and properties owned by school systems in North Carolina.

Bringing a knife onto school grounds is a class I misdemeanor in North Carolina.

Giving back to those who give