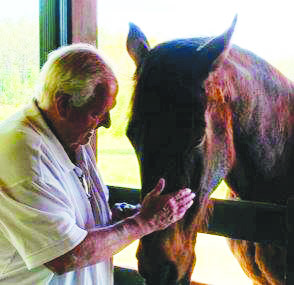 COLUMBUS–Walter Edward Otto II (Otts) of Columbus, NC was gently and unexpectedly ushered into the arms of his loving Heavenly Father on September 3, 2021 with his family by his side.
Walt was born in Detroit, Michigan on September 7, 1943; he was the son of Rudrick and Eugenie (Tremblay) Otto.

A graduate of Hillsdale College, he lived most of his life in Albany, New York as a successful automobile dealer, and retired in 2020 to his horse farm in North Carolina. For relaxation Walt enjoyed his float plane, backwoods fishing in Canada and anything to do with the ocean.
Walt’s Catholic faith was very important to him, and he chose to live that faith through kindness, generosity and a silly joke to all who knew and loved him. He said that all he needed in life was, “a kind word and a gentle smile”.
Walt is survived by his loving wife, Lisa; three daughters: Heidi (Bob Rose), Holly (Mike Pendergast) and Heather; five grandchildren; his sister, Gretchen Apple; and nephew Chris Otto who continues the Otto Cadillac legacy. Walt also leaves behind his three beloved dogs and his horse Kit, who were the light of his life and added so much joy to his days. Walt was preceded in death by his parents and his brother Rick Otto.

A celebration of his amazing life will be held at a later date.
Condolences may be left at www.pettyfuneralhome.com.