Couple claims they were held hostage by the sheriff’s office 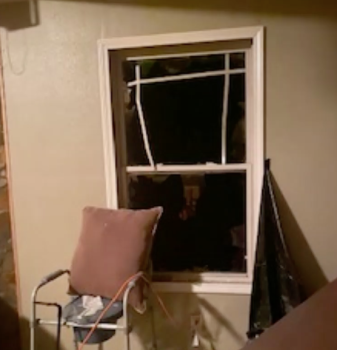 A Pea Ridge couple is upset their home was damaged by the Polk County Sheriff’s Office during a search. The Logans have gotten estimates of the damage, which is $35,000. (Photos submitted by Daniel Logan) 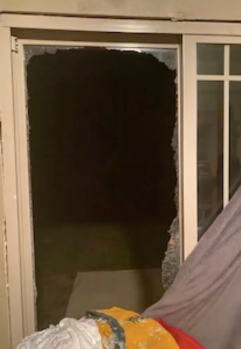 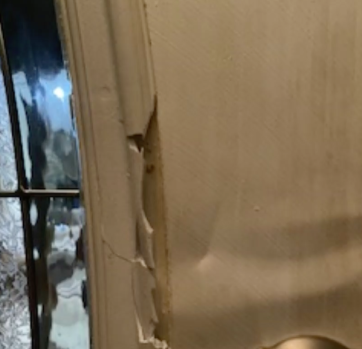 PEA RIDGE—A Pea Ridge couple is claiming the Polk County Sheriff’s Office held them hostage for over 6 hours while officers searched their home in June and did $35,000 worth of damage by breaking doors and windows.

Daniel and Pamela Logan say on June 14 the sheriff’s office came to search their home.

They have put up flyers around the community and taken to social media with their concerns.

The Logans say they were detained at a nearby church during the search, with Pamela saying an officer told her when she needed to use the restroom if the church would not let her in, she would have to go on herself. Polk County Sheriff Tim Wright said no deputy said that to her.

The Logans also claim that there was no reason for officers to damage the doors and windows to gain entry, because they sent a family member over to unlock all the doors for officers.

Wright said the sheriff’s office deals in facts. He said he stands behind his officers 100 percent when they are in the right and his office has worked over the past 3 years to develop as much transparency and public accountability as possible under the law.

Daniel Logan was arrested that day for possession of a firearm by a felon. The search was in regards to a shooting in which Brandon Logan has been charged with.

Following are letters and statements from Daniel Logan and Margaleen Carson regarding the search as well as questions and answers from the Bulletin to Sheriff Wright:

On June 14, 2021, Pamela Logan and myself, Daniel Logan was followed from the end of Pea Ridge onto Highway 14 to Deb’s Mini Mart on Highway 9 S. Green Creek by the Polk County Sheriff’s Department. At this point we were ordered out of the car and held at gunpoint by Deputy Kevin Guerrero, Deputy Jonathan Luchak and Lance Johnson. They took our phones and wouldn’t let us leave. They detained us and told us they had a search warrant for our son Brandon Logan. I asked them to show me the search warrant and they refused. I asked to make phone call and they said no. I told them to call the FBI and the news media to search my house and film it and they refused. I also ask them to call my ex-parole officer, Tray Smith and they refused. I saw the Rev. Arbutus Hines and asked her to get in touch with my sister Margaleen Carson and her husband Allen Wiley to open the doors to my home and the man cave for the sheriff’s department. After they let them in, they ordered my sister and her husband to leave, or they would be arrested. Then, we were taken to the police department around 3:30 p.m. and questioned by JJ Sauve. About 5 p.m. we were ordered to follow them to Zion Grove A.M.E. Zion Church. We were ordered to stay on the porch of the church. When we were at the church my wife, Pamela Logan asked if she could go home to use the bathroom. Officer Lance Johnson replied, “if the people church allow you in to use the bathroom, you can. If not, you just going to have to pee on yourself.”

Sharon Rogers, the secretary at Zion Grove A.M.E. Zion Church allowed her to use the bathroom. While we were at the church, we heard it come across the radio that our son, Brandon Logan had already turned himself in. I would say 30 minutes to an hour later we heard them busting out our windows to our home. I asked why are you busting out our windows and the officer replied we have plenty of money to pay for it. I asked over and over if I could see the search warrant. I asked for a police report and haven’t received one. I was arrested for possession of a firearm by a felon and held kidnapped at the county jail.

I believe under the North Carolina Hate Crime Law my rights were taken away by these officers because I am married to a white woman. I believe I am being targeted. I feel the entire police department needs to be investigated. I think we should be reimbursed for all the damages done to our home by these police officers estimated at $35,000.

On Monday, June 14, 2021, my brother Daniel Logan called me and told me to go to his house and unlock his doors so the cops could come in and search for his son Brandon. Allen Wiley and I went to his house and unlocked every door, the front door his wife’s bedroom door. Dan’s bedroom was already unlocked. We didn’t unlock Brandon’s door because I forgot the code. We also unlocked the man cave that is built behind his house. While we were unlocking the doors, I was on the phone with a police officer that was waiting at the church. He told us when we finish unlocking the doors to pull down to the church so they could look in our vehicles.

Question: Can you send me a copy of the search warrant?

Answer: We cannot release documents from an active case file however, executed search warrants and attached inventories that are not sealed can be requested directly from the Clerk of Court.

Question: Is it normal for a search to include making the homeowners stay somewhere close by for that long (I think he said they were held for approximately 6 hours)?

Answer: It is normal to secure a crime scene, especially one where a shooting has occurred and the suspect is possibly still located inside the residence. The Logans were not detained in the church parking lot, but they were told that they could not return to the home while the tactical team was trying to make contact with Brandon Logan to serve his arrest warrant or during the evidence collection process. This is a common law enforcement practice and is for the safety of the public, the officers, and the suspect, and to prevent spoliation of or cross contamination of evidence being collected. Depending on the complexity of a crime scene, a search can take as little as a few minutes or many hours. Deputies checked enroute to serve the search warrant at this residence at 5:51 PM and cleared the scene at 8:56 PM.

Question: Did an officer tell the woman she would have to pee on herself if the church wouldn’t let her in? What is the protocol for letting people use the restroom during a search? If the officer did say that, will he be disciplined?

Answer: No, that statement was not made by a Polk County Deputy. The Logans were in a public parking lot and not detained. They had the vehicle they had arrived in with them and were free to go anywhere other than into the crime scene, as explained above.

Question: Why did officers break windows and doors if the homeowner let them in? What is the protocol on that and does the sheriff’s office pay for damage in these cases?

Answer: Once again, the Logans were not at the house and they did not give members of the tactical team any useful information for safely gaining access to all areas within the home. A homeowner does not have the authority to dictate what areas of a home are searched pursuant to a search warrant. The tactical team spent approximately an hour attempting to make contact with anyone inside the residence prior to making entry into the residence. At the time of entry, the tactical team did not know if the suspect in the shooting was still inside the home and standard protocol for breaching doors and using distraction devices were followed to ensure officer and public safety. After making entry into the residence and clearing each room of the home, the tactical team was contacted and told that Brandon Logan had come to the detention center and was in custody. The Sheriff’s Office does not generally pay for damages to a home caused by necessary forcible entry to serve a search warrant and/or an arrest warrant.

Question: If the sheriff’s office does pay for damages, how long does that take?

Answer: The Sheriff’s Office does not generally pay for damages to a home caused by necessary forcible entry to serve a search warrant and/or an arrest warrant.

Question: He also said officers took jewelry and money. What was the purpose of that?

Answer: The inventory of items seized at the residence is attached to the executed search warrant filed with the court. No other items were seized.

Question: How do you respond to him calling this a hate crime?

Answer: Deputies were investigating a shooting that occurred in the driveway of the home. The victim in the shooting was transported with serious injuries to Spartanburg Regional and interviewed by Investigators. The evidence gathered was presented to a Magistrate and a Superior Court Judge and a warrant for arrest was issued by the Magistrate for Brandon Logan, and a search warrant was issued for the residence by a Superior Court Judge. When a person is shot, law enforcement officers investigate the facts and present them to judicial officials to determine if probable cause exists to proceed in the investigation. This incident was not initiated by Polk County Sheriff’s Office, but by the victim of the shooting.

“We deal in facts. When we make factual accusations, they are called criminal charges and a judicial official and/or a grand jury determines if probable cause exists to act on those facts. When individuals charged with crimes don’t like the facts, we find them more and more taking to social media and other platforms to make outrageous and often bold-faced lies. I stand behind my Deputies 100% when they are in the right and we have worked tirelessly over the past 3 years to develop as much transparency and public accountability as possible under the law. We are held accountable through self-reporting, body cameras, extensive background checks, pre-employment and continuous employment polygraphs, professional training and standards internally and at the state level, and an independent judiciary. I’m confident that these matters, like all of our matters, will be resolved in court, as they are meant to be.” – Sheriff Tim Wright.
​