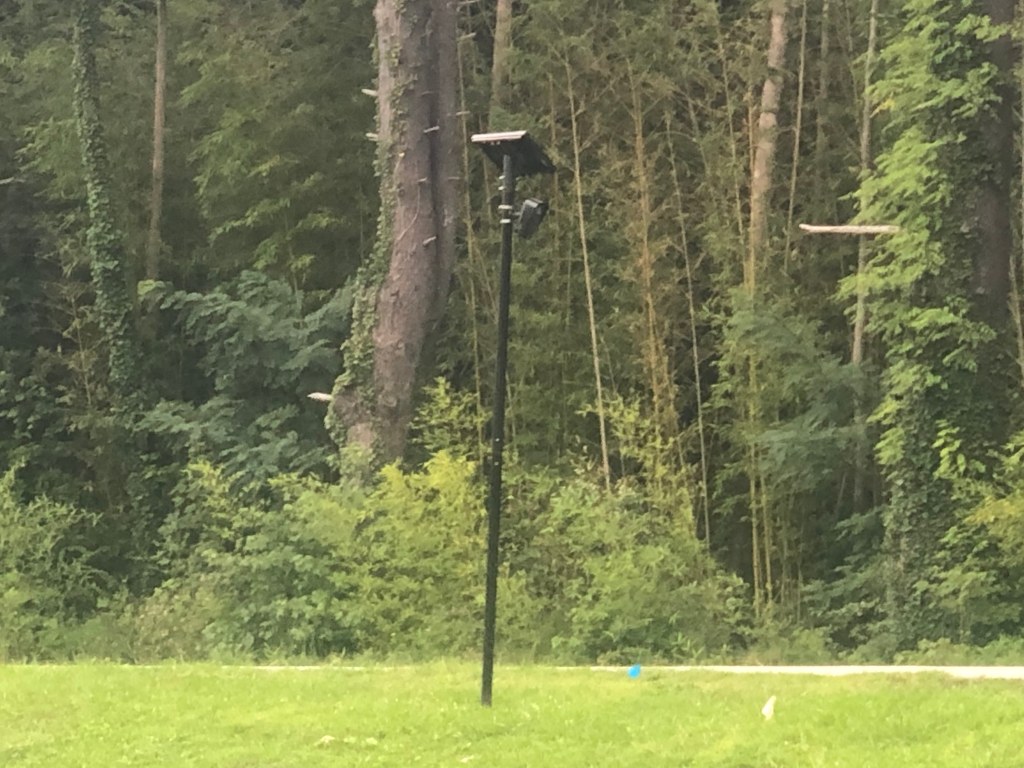 Pictured is one of the security cameras recently installed near the corner of Howard Gap Road and Highway 108. The Polk County Sheriff’s Office and the Tryon Police Department partnered with the company Flock Safety. (Photo by Leah Justice/Tryon Daily Bulletin)

POLK COUNTY—The Polk County Sheriff’s Office and Tryon Police Department have partnered with a company to install security cameras throughout the county.

Some cameras have already been installed recently, with plans for a total of 5-7 cameras in the Tryon and county areas.

The departments partnered with the company Flock Safety to test out the stationary camera systems, according to the sheriff’s office.

The cameras are owned and operated by Flock Safety and will be used to compare vehicle license plates, makes and models against regional and national crime data bases.

Sheriff’s office officials said they do not use face recognition.

Flock Safety coordinates with the North Carolina Department of Transportation and places the cameras in state rights of way and will monitor traffic flows on streets and highways.

The data is stored in Flock’s system for a maximum of 30 days for investigative purpose and has been used in various communities to solve crimes, including break-ins, larcenies, assaults, homicides, Sauve said.

The cameras will not be used for traffic enforcement or registration violations, according to the sheriff’s office.

“With the use of Flock’s ALPR system, officers will have an additional tool when criminal activity has occurred to aid in locating potential suspects,” said Tryon Police Chief Jeff Arrowood. “These devices will often enable clearing a case giving the victim more peace and comfort at a quicker rate.”

Arrowood said last year Tryon experienced multiple vehicle break-ins over a period of a month and officers had a description but no further information to go on.

“These cameras would have allowed us to search the database for the vehicle fitting the description, allowing us to potentially make an arrest within a day,” Arrowood said.

He also said the cameras can be used to help in the location of runaways and missing persons who may become lost from a medical condition.

Polk County Sheriff Tim Wright said criminals are coming into Polk County and committing crimes against our citizens every day.

“These cameras are like having a deputy sitting by in some of our high traffic and high crime areas 24/7,” Wright said. “With limited resources, the immediate notifications of wanted and missing persons and stolen vehicles may not just be time saving, but also life saving. We’ve already seen the tremendous benefits of security camera video in criminal investigations over the past couple of years including an attempted murder, several property crimes and an arson spree.”

Wright said his office recognizes the need to balance public safety and citizen rights and chose to join in partnering with Flock Safety because of their track record of accountability and commitment to public engagement.

“We’ll be assessing the benefits of the cameras over the next year and I’m hoping that this partnership proves to provide increased safety and peace of mind to the citizens of Polk County,” Wright said.

Probably the most recognizable example of ALPR usage is on marked police cars, usually equipped with 1 to 4 corners, or attached to public intersections in conjunction with traffic lights and redlight cameras.

According to the National Conference of State Legislatures, when employed ethically and objectively, ALPRs are an effective tool for law enforcement, cutting down on the time required for investigations and acting as a force multiplier for agencies with limited budgets. In 2011, a study by the Police Executive Research Forum concluded that

ALPRs used by the Mesa, Ariz., Police Department resulted in “nearly 3 times as many ‘hits’ for stolen vehicles, and twice as many vehicle recoveries.”

Flock Safety has found that our suite of products can reduce crime by over 70 percent.

What is Flock Safety?

Flock Safety is a public safety operating system that helps communities and law enforcement in 1200+ cities work together to eliminate crime, protect privacy, and mitigate bias. We build devices that capture objective evidence and use machine learning to create and deliver unbiased investigative leads to law enforcement. Our proprietary devices and cloud-based software reduce crime by up to 70%.

Who does Flock Safety serve?

Flock Safety serves HOAs, neighborhoods, business owners, law enforcement agencies, towns, and cities to provide them with the tools they need to increase the effectiveness of their public safety efforts, target crime efficiently and objectively, and help provide the information police need to stop crime.

Where is Flock Safety located?

Over 1,200 cities and thousands of neighborhoods across the U.S. use Flock Safety.

Flock Safety can service customers almost anywhere across the U.S. with our local teams strategically located in cities across the country.

Flock Safety is headquartered in Atlanta and has over 270 employees.

What is the Flock Safety Falcon camera?

The Flock Safety Falcon is a solar-powered, motion-activated and infrastructure free camera that leverages our proprietary Vehicle FingerprintTM technology to identify and take a snapshot of the critical details of a vehicle that passes by it. The Falcon captures the make, vehicle type, color, license plate (full, partial, or missing), state of the license plate, and the unique features of the vehicle, including damage and after-market alterations. They are connected to the cloud through LTE, like a mobile phone, and perform 24/7 in any weather.

Flock Safety cameras leverage the FBI’s NCIC federal and state hotlist, which are updated every 24 hours, to send real-time alerts to nearby law enforcement officers when a wanted or stolen vehicle is detected. Officers can then verify that information with their dispatch to safely make arrests and recover stolen property. They can also be used in the event of an Amber or Silver Alert in the same capacity.