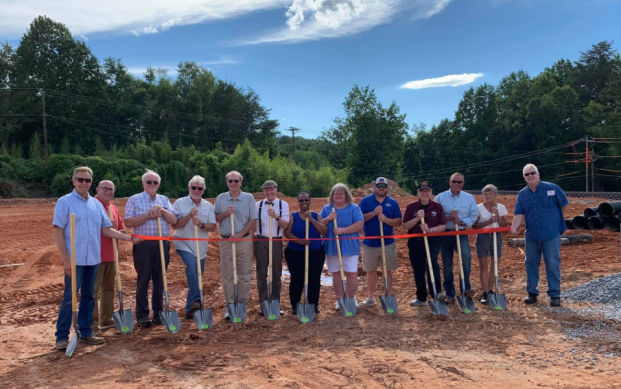 Landrum leaders held a groundbreaking ceremony recently on the new farmers market pavilion. The pavilion could be finished as early as October, but will likely be finished in November. (Photos submitted by the City of Landrum)

City holds groundbreaking; market set to be finished in November

LANDRUM—The west side of Landrum could be taking a turn for the better soon.

Landrum City Council and other leaders broke ground on the new site for the Farmers Market Pavilion recently.

Landrum Mayor Bob Briggs said the construction of the pavilion is set to be finished in October, but will likely be complete in November of this year.

The city thanked Tricia Taber for her public relations work on the project, with officials saying the pavilion will be a tremendous asset to the city and its residents.

The pavilion is being constructed at the intersection of West Rutherford Street and South Randolph Avenue near Burke’s Outlet.

The project is estimated at $1.8 million and will include a 15,000 square-foot barn that can be used year-round for special events as well as the annual farmers market on Saturdays. The current farmers market is held on North Trade Avenue.

Taber said Satchel Construction, out of Charleston, has begun grading the site. The pavilion will include an open lawn area for community gatherings.

Another building designed to look like a silo will be built on West Rutherford Street to serve as an information center for the farmers market as well as other places to visit in the City of Landrum and surrounding areas.

The new building will include sliding glass windows, which can be closed during the winter or inclement weather or opened during nice conditions.

Mayor Briggs said the pavilion could be finished as early as October but the completion will likely be in November, weather permitting.

Briggs also said the pavilion will reshape the city and increase tourism.

The pavilion will allow farmers to park their trucks in the back of the building and city officials are hoping it will draw more people to town.

“With it being across the tracks, it’s going to open up the other side of town,” Briggs said. “Right now the business concentration is on the east side of the tracks and we hope this will open up that western part.”