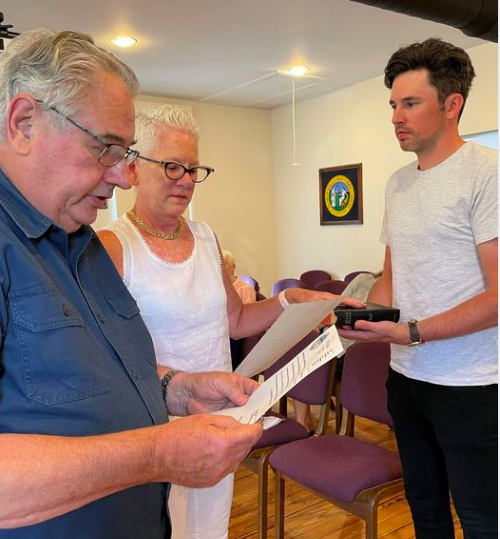 Saluda Mayor Fred Baisden swore new city commissioner Melanie Talbot into office Monday night. Talbot was appointed by the board to replace former commissioner Bob Ross, who resigned to move out of state earlier this year. (Photo by the City of Saluda)

Saluda swears in Melanie Talbot as after appointment

SALUDA—The City of Saluda has a new commissioner.

The Saluda Board of Commissioners met Monday and swore Talbot into office. Talbot replaces former commissioner Bob Ross, who moved to Florida in March.

The board chose Talbot to be appointed for the remainder of Ross’ term.

Ross was first elected in 2019 as the high vote getter, so received a 4-year term.

Talbot will serve out his term and once that term is up in 2023, will have to run for election if she chooses to continue.

Saluda Mayor Fred Baisden swore Talbot into office Monday night at the beginning of the board’s regular meeting and she participated in business for the first time.

Columbus holds off on budget