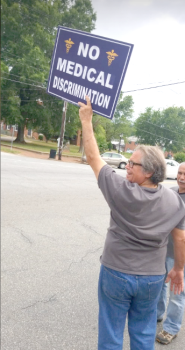 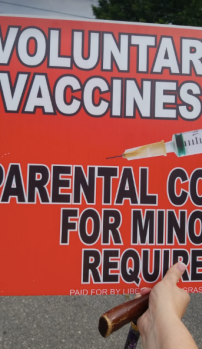 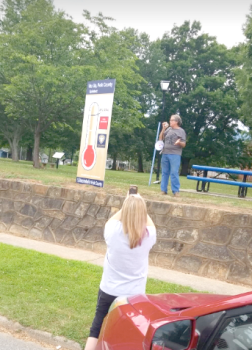 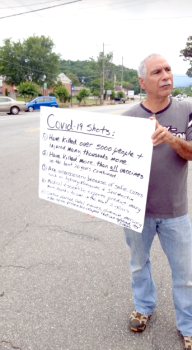 COLUMBUS—A sign that was installed by the county at Stearns Park Thursday caused people to gather against forced vaccines.

The protest occurred Thursday at 5 p.m. and was organized within 6 hours by the Republican Headquarters. About 25 people attended.

Polk County GOP Chair Lee Emerson said there has been a lot of misinformation about a lot of things and he is very against forced vaccines or vaccine passports.

“It should be between people and their doctor,” Emerson said.

He said the protest was about people’s right to make their own choice regarding vaccines and the sign installed signified a goal. He also said he is against incentives that are currently happening, such as free lottery tickets and free ice cream for people to get the vaccine.

Emerson said it is immoral what is happening and people need to be more educated regarding the vaccine, that has not been approved by the FDA.

“The facts haven’t been reported by the government, by the press,” Emerson said. “We haven’t even done the proper human trials. So this is a huge experiment on humanity on a virus that over 99 percent of the people survive.”

Emerson said he respects everyone’s right to get the vaccine.

“Last night (Thursday) was an attempt to show the other side,” Emerson said. “We are just a group of people speaking up for what we believe in. We aren’t saying you can’t.”

The group is also voicing their opinions against forcing children to wear mask.

The sign was stolen last night, but Emerson said it was not anyone in the group of protesters. They had a meeting following the protest and discussed placing a counter sign by the county’s sign so people could see the other side.

The Columbus Police Department is investigating the stolen sign.