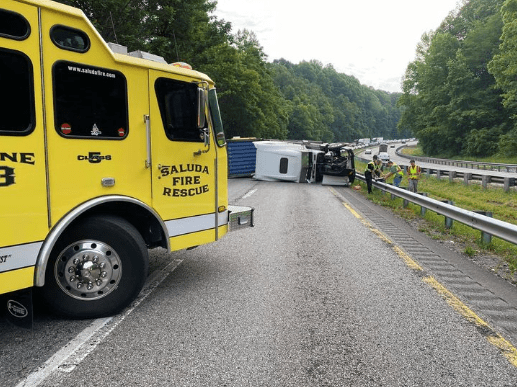 An overturned truck caused the westbound lanes of Interstate 26 to be shut down for several hours Friday morning. The driver was transported to the hospital with minor injuries. (Photo by Saluda Fire and Rescue)

SALUDA—Drivers in the area had standstill traffic once again on Friday morning along Interstate 26 as a truck overturned and blocked both lanes.

The accident occurred Friday morning at the 61-mile marker west bound, just before the Saluda exit.

The driver was transported to the hospital with minor injuries, according to the Saluda Fire and Rescue Department.

Both west bound lanes were shut down for several hours and traffic was backed up at some points along U.S. 74 with drivers trying to get on Interstate 26.

Local crews worked all morning to get the truck off the interstate. It was not known as of press time what the truck was transporting.

The Town of Tryon sent a message at 8:36 a.m. for are residents to drive with caution on Trade Street and U.S. 176 between Tryon and Saluda because of the influx of traffic because of the closure.

Tryon also had a closure of one lane along Highway 108 in Lynn for tree work at the same time Friday morning.