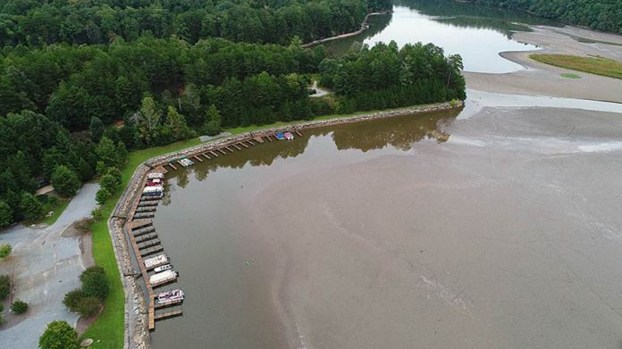 State to dredge the lake

Polk County and the North Carolina Wildlife Resources Commission are working together to dredge the lake.

Polk County owns the lake, but the state is responsible for keeping it public at the marina.

The dredging is planned for this fall, with the permit for almost 6,800 cubic yards of material to be taken out at the marina.

NCWRC Engineering Section Chief Gary Gardner said that the WRC recently received approval for the permits, which took more than a year and included public meetings and reviews. The state is currently working on bid documents to send out to contractors.

“The plan is to start the dredge this fall,” Gardner said. “Naturally, we don’t want to start during the busy boating season. Everything is on track now.”

County officials have been receiving complaints from the public about the access to the lake because sediment from the Green River has filled up sections near the marina.

Gardner said the plan is to dredge the sediment and do inland placement and habitat creations where the river is forming deltas.

Polk County applied for a Shallow Navigation Dredge grant that will help fund much of the project with the rest being paid for by NCWRC.

Polk County purchased Lake Adger years ago for $1.6 million, with plans to draw water from it in the future, but those plans have never come to fruition. The county owns the dam and is currently saving money to make required repairs to the dam.

Lake Adger is more than 430 surface acres and has more than 14 miles of shoreline.

Gardner said the lake will still be useable during the dredging and he doesn’t anticipate the project taking over a month. He said there may be times that access is closed or equipment is being moved on the ramp, but state officials hope to keep the lake open and will communicate any closings to the public if they happen.