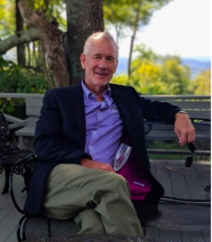 TRYON—Long-time district attorney Alan Leonard will be remembered next weekend in a service at Harmon Field.

Lt. Col. Leonard also served as an advisor on legal issues to sheriff’s departments across the state of North Carolina also served in the Air National Guard and did 2 tours of duty in the Persian Gulf War and received several medals for his service.

Leonard was known as being a local historian and published articles, served on the advisory boards of the Pacolet Area Conservancy, the Tryon Fine Arts Center, the Polk County History Museum and was a member of the Hendersonville Honor Guard.

“In the community outpouring that followed my father’s death a stunning number of people described him as a best friend, a brother, the best trial lawyer ever,” said Leonard’s son, Dr. Will Leonard. “I will add to this that he was a patriotic and tireless public servant, a fiercely proud Tryonite and North Carolinian, and the most dedicated and loving father you can imagine.”

Leonard’s daughter Caroline said while many people knew her father as the humble public servant he was, she remembers his wry sense of humor the most.

“To this day, my dad can make me laugh out loud recalling his antics and how he relished telling a good story,” Carolina Leonard said. “That’s a side of him I look forward to sharing with my son.”

Leonard’s daughter, Sarah said there is nothing like the pride she feels having a father like Alan Leonard.

“He was a man who served all in any capacity he could,” Sarah Leonard said. “He made the kind of stamp on this world we all wish we could make.”

The memorial service will be held at Harmon Field at 10 a.m. Saturday, May 22 under an open-air tent across from the Pacolet River from Tryon Arts and Crafts.

Parking will be available at Tryon Arts and Crafts and at the Tryon Presbyterian Church.

The service will include military and law enforcement honors, including a 21-gun salute and the playing of taps by the Henderson County Honor Guard and the Henderson County Law Enforcement Honor Guard. There will also be music by bagpiper and Asheville Firefighter David House, period fife and drum music by the 26th North Carolina field music and traditional Irish tunes by Irish Temperance. There will also be several speakers.