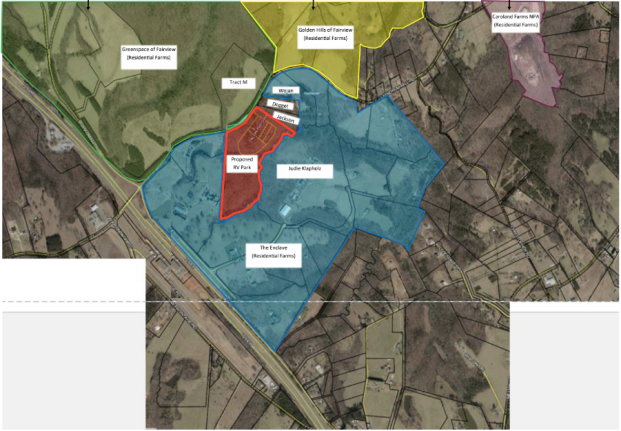 CAMPOBELLO—Some local residents have united recently to oppose a proposed RV Park off Landrum Mill Rd. near Landrum and Campobello.

Landrum City Council met Tuesday and heard from Madelon Wallace, who has started a petition against the park.

Spartanburg County Council is scheduled to meet this Monday to hear the plans of the park.

The park is proposed to be 50 sites, located at 1970 Landrum Mill Rd., Campobello.

The RV Park is being applied for by T. Tree Farms.

As of early Friday morning, almost 500 people had signed the petition, which is located online at https://www.change.org/OpposeTTreeFarmsRVPark.

Following is the petition being circulated, which organizers will take to the Spartanburg County Council meeting on Monday:

We, the undersigned residents, landowners and interested parties of the area for which the T. Tree Farms RV Park is proposed, emphatically oppose this project for the following reasons:

The proposed RV Park is located at the center of the Conservation Focus Area for Landrum and Campobello as described in “A Special Places Inventory of Spartanburg County” by Upstate Forever.

The proposed project is contrary to the Land Use Goals of the Spartanburg County Comprehensive Plan, which states in pertinent part (p. 185):

“Prohibit intense incompatible nonresidential development from locations on roads where the majority of activities are residential.”

All existing properties on Landrum Mill Road between North Pacolet Road and I-26 are residential and include 4 residential, low density neighborhoods, protected from high impact development by either restrictive covenants or conservation easement.  Walkers, bicycles and horses use the narrow and winding roads on a regular basis and the Landrum High School track team trains on the roads, also.

The Comprehensive Plan defines as the main causes of incompatibility “traffic, noise, light, intensity of use, visual impact, and environmental impact.”  In the subject area, virtually ALL of the activities are residential or related thereto, and there is currently NO commercial or high density development.  The siting of a 50 space RV park clearly constitutes an intense incompatible nonresidential development, contrary to the land use goals of the Comprehensive Plan.

Petitioners did not express their concerns prior to or during the Planning Commission’s initial consideration of the project, because nobody was notified that it was in the works.  The Planning Commission’s published agenda for the March 2 meeting, in which the project received conditional approval, indicated only that an RV Park was under consideration, with no mention of the actual location.

40 years in the making

Stott’s Ford is celebrating our 40th in business! On April 15, 1981, the family-owned business of Stott’s Ford celebrated their... read more