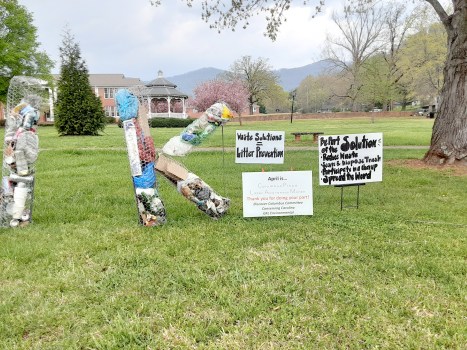 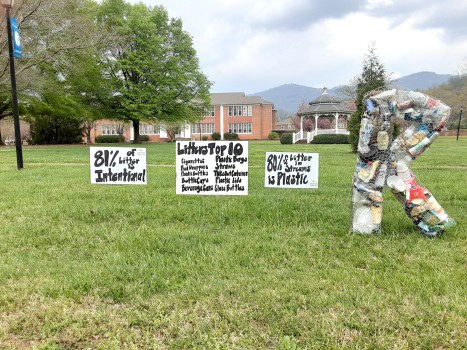 Display removed because it did not meet county regulations

The display was placed at Stearns, in downtown Columbus for Litter Sweep Month by Conserving Carolina, who has partnered with Columbus and others to clean up the county during the month of April.

The removal began with a complaint to the county and some have named the person on social media since the removal of the display.

Melton said he had no choice but to have county maintenance remove the sign, but he specifically instructed that the county place it in a storehouse, to make sure it was not damaged and that it was taken care of.

Posts on social media are saying that Stearns allows large Christmas decorations and other large displays and the RETHINK display should be no different.

Columbus Town Councilman Mark Phillips, who the Bulletin reached out to on Friday, said he called the commissioners as a citizen.

“I thought it was a tacky and ugly display and called county commissioners and asked for it to be removed,” Phillips said. “I am one person. My complaint had nothing to do with the size. Whatever the county did, the county did per their ordinance. All I did was to call and say, I don’t think it looks good and from there a couple of days later it was taken down.”

Phillips said he is all for Litter Sweep and voted for the proclamation as a councilman.

“I just think there’s a better way,” Phillips said. “Take a picture and put it on a banner.”

The Towns of Columbus and Tryon and Polk County Commissioners have all unanimously approved a proclamation declaring April as Litter Sweep month. The City of Saluda plans to approve the same proclamation on Monday night. There are several opportunities to participate in Litter Sweep activities this month. A Lake Adger clean up originally scheduled for Saturday, April 10 has been rescheduled until Saturday, April 17.

Following is a press release regarding the Litter Sweep in Polk County:

Since the emergence of plastics in the 1950’s, and consequently the surge in litter, we’ve been told the narrative that the solution to litter is through, you guessed it, not-littering. For the month of April, the

Town of Columbus and Conserving Carolina are encouraging our community to RETHINK this narrative and consider alternative solutions.

Anderson and Sarah Sussman, have installed “RETHINK” in Stern’s Park. Each letter, filled with roadside litter, is a visual of the most common forms of litter and a symbol of how our individual actions impact our neighborhoods, parks, and natural places. Inspecting these letters further, you will recognize many of these objects and may notice one common theme — single-use. It’s no secret that our trash cans and roadways are filled with objects produced with the intention to be thrown away after one, single use, and although these disposables are convenient, they will always pose the risk of becoming litter and polluting the planet we share.

This leads to the question — how do we prevent litter when trash is so prevalent within our society? Is the solution more trash cans, stricter law enforcement, and educating the youth? Or should we target the issue at the source — the production of these objects to begin with. In part, these all offer valid solutions to our litter and our waste problems.

We all know the importance of Reduce, Reuse, and Recycle, but now it’s time to take it a step furtherand RETHINK our dependence on single-use products…and RETHINK the sources of litter and how to

Let’s work together to cleanup and put trash in its place by encouraging waste-free solutions — like supporting a circular economy with reusable, refillable, and returnable opportunities.

create more beauty for ourselves and our friends, family, and neighbors to enjoy…and ultimately, keep our soils and freshwater sources healthy for both humans and animals. Let’s RETHINK our future!

During the month of April, there will be several Litter Pickups organized in Columbus and many other communities.  It’s a great time to get outside and do your part to clean up our neighborhoods – becomea volunteer!

In case of inclement weather, please contact Pam Torlina by e-mail, pam@conservingcarolina, by 8 a.m. on the day of the cleanup and/or check the Conserving Carolina website or Facebook page to see if the

Learn more and become a member at conservingcarolina.org.