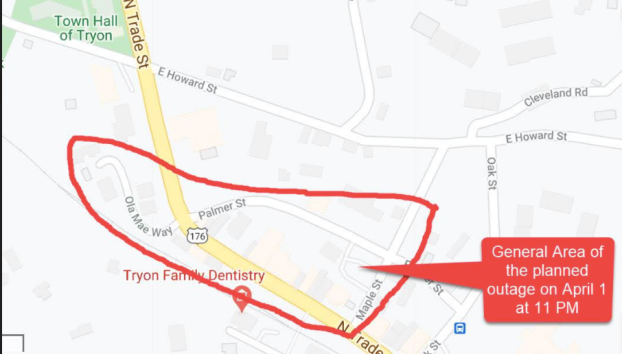 Duke Energy provided a map of the area approximately 56 customers will be without power because of work being done on Thursday, April 1 beginning at 11 p.m. in Tryon. (Map submitted by Duke Energy)

Update: Due to high winds forecasted on Thursday and Thursday night, Duke Energy is postponing this outage until a later date. Impacted customers will be notified.

If no call is received, customer will not be affected

TRYON—There has been some confusion recently over who will be impacted by a planned power outage in Tryon on Thursday, April 1, which will begin at 11 p.m.

Duke Energy originally planned the power outage for last Thursday, but rescheduled it for this Thursday, April 1.

Duke Energy’s Local Government and Community Relations Manager for Cleveland, Henderson, Polk, Rutherford and Transylvania Counties Craig DeBrew said there has been confusion over who will be impacted and the time. He provided a map to the Bulletin and said any customer who did not receive a call on Tuesday, March 30 should not be impacted.

“It will impact approximately 56 customers in the general area shown below,” DeBrew said. “Customers impacted by this outage should expect to receive an automated notification call this afternoon, Tuesday, March 30 around 4 p.m. Customers who do not receive a call should not be impacted.”

It was previously reported that the town was advised the power outage would begin at 11 a.m. DeBrew clarified that the outage will begin at 11 p.m. The outage could last approximately 8 hours.

Whether you walk into the Tryon Daily Bulletin office or call on the phone, a new person will be greeting... read more