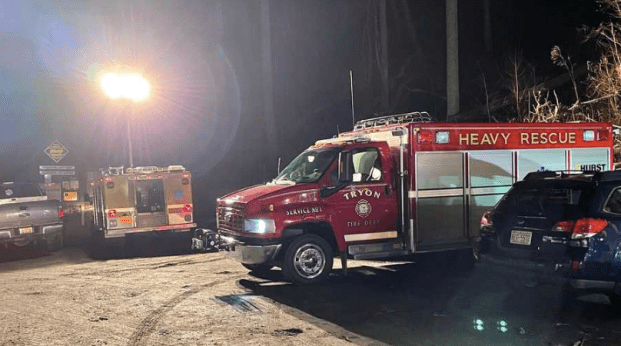 Rescue crews from around the area searched for a missing hiker in the Green River Game Lands in Saluda Saturday. The 77-year old hiker spent the night in the woods during a winter storm warning and was found safe Sunday morning. (Photos submitted by Saluda Fire and Rescue)

SALUDA—During a winter storm warning on Saturday night, local crews were searching for a lost hiker in Green River Cove in Saluda.

The Saluda Fire Department reported at 9:21 p.m. Saturday that units from Saluda, Tryon, Columbus and Mill Spring fire departments and the Polk County Rescue Squad, Polk County EMS, Polk County Emergency Management and Henderson County Rescue Squad were for searching for a lost hiker in Green River Cove. The hiker was reported missing in the afternoon and 40 rescuers were on scene that night conducting the search.

The hiker, a 77-year old man was reported missing around 5:15 p.m. Saturday. He was found the next morning around 10:20 a.m. He spent the night in the woods and was making his way out of the Green River Game Lands when crews discovered him.

The hiker was reported to be an experienced hiker. Rescuers said they think he got disoriented and slept in the woods for the night. It was unclear what gear he had with him to make it through the night.

The area saw some snow Saturday with a winter storm warning issued for Saturday night into Sunday.