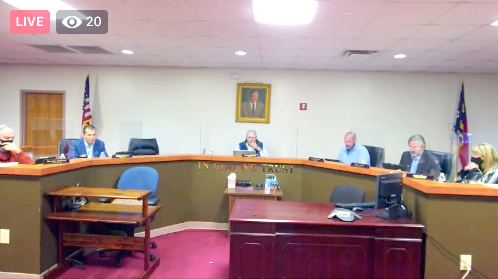 COLUMBUS—County commissioners heard from 9 residents this week who urged them to make a statement about the raid on the Capitol on Jan. 6. Some residents said they were concerned for their safety, especially knowing that some of their neighbors participated in the riot.

“We all want to work together as a united community, regardless of party affiliation,” Ashburn said. “We depend on you, our duly-elected leaders, to allow peaceful, lawful demonstrations but to condone, and act, to correct any actions or publications that would even suggest that our county is less than peaceful. The world and the citizens of Polk County, N.C. are watching.”

Carol Nothstein said she is very concerned about what happened at the Capitol in Washington, D.C.

“I am especially concerned to know that some of my neighbors participated in that riot,” Nothstein said. “I don’t care what political party anyone is affiliated with. I do care about preserving democracy in our county and country. As members of the Polk County Board of Commissioners, I ask you to commit to the rule of law and order. Remind everyone that no one is above the law.”

Jackie Burke said hate and misinformation needs to stop with the local board of commissioners.

“Our nation, now at a state of Civil War, can only heal if we reach out to one another, not with fists around firearms, but in peaceful coexistence,” Burke told commissioners. “People can bark and holler on a national level with microphones in their face, but YOU are the ones with the real power for ensuring our democracy and rights as citizens may continue.

Don’t tell us about the looting and voter fraud in another state or another city. Talk about only what you witness with your own eyes in Polk County.

Hatred and anger in our county? Sadly yes. How can you, as commissioners, lead your citizens to care about one another, and not view one another with mistrust and anger over national issues that, frankly, is not your business.

We are fortunate to live in a county with good law enforcement, good social service, good zoning and good schools. I commend you for that.

Now if you feel the need to go one step further, do so by promoting an atmosphere in which I will not view others with suspicion or mistrust.

Do those people I see each day dismiss me because I choose to wear a mask in public? Do they hate me because of my religious or political beliefs? Can we say let’s ease up and take a breath without being hit by arguments or epithets?”

Jeff Byrd quoted Sen. Ben Sasse, a Republican in Nebraska who recently wrote in The Atlantic, “The violence that Americans witnessed-and that might recur in the coming days-is not a protest gone awry or the work of ‘a few bad apples.’ It is the blossoming of a rotten seed that took root in the Republican Party some time ago and has been nourished by treachery, poor political judgment and cowardice. When Trump leaves office, the Republican Party faces a choice: We can dedicate ourselves to defending the Constitution and perpetuating our best American institutions and traditions, or we can be a party of conspiracy theories, cable-news fantasies, and the ruin that comes with them. We can be the party of Eisenhower, or the party of the conspiracist Alex Jones. We can applaud Capitol Police Officer Eugene Goodman or side with the mob he outwitted. We cannot do both.”

Byrd asked commissioners to pledge Monday night that as leaders in the local Republican Party, as elected leaders for all of us in this community, to work to uproot that seed and plant in its place a renewed spirit of reason and democracy?

Ray Gasperson, former Polk County Commissioner, said during this time of the COVID-19 pandemic, he hopes and prays that we all recognize the dire public health pandemic threat on the health of our democracy.

“The wide spread use of misinformation and disinformation from those intent on attacking the traditions and Constitution on which our nation and democracy was founded, has now reached a level that it may threaten the very foundations on which our nation has survived nearly 250 years,” Gasperson said. “It’s now, more than ever, an imperative that we all work non-stop to reach out to our fellow citizens, find common ground and make sure that the health of our democracy is no longer threatened.

Thank you commissioners for your resolution in support of Citizens Constitutional rights.”

Sharon M. and John J. Carter, Jr. said they were writing to encourage commissioners to make a statement condemning the lawlessness and violence at our nation’s Capitol.

“It is important that everyone in our county know that you support the rule of law in solving conflicts in a peaceful manner,” said the Carters.

Libbie Johnson said as a working person in Polk County, she has lost 2 sales (real estate) as people are hesitant to move to our county because of recent Facebook posts re: orchestrated civil unrest.

“The buyer from Texas that I was working with who called today, Jan. 18, said, ‘We are worried that Polk County is not as safe as we were thinking it was,’” Johnson said. “I am very concerned that certain citizens in our county are giving us a negative review. Perceptions such as this take a long time to correct. I hope that commissioners and elected officials in Polk County are taking this seriously.”

Karen Dacey said we have seen counties disturbing replays of the traumatic violent events that occurred at our nation’s Capitol on Jan. 6.

“This assault on our democracy cannot go without repercussions for those participants who incited the mob, harmed others, committed acts of vandalism or violence, breached the Capitol building or threatened lives,” Dacey told commissioners. “After the mayhem in our nation’s capitol, I stand with others in our community to request that our county commissioners pass a resolution stating the board’s commitment to ensuring all citizens’ safety and constitutional rights.

There is no excuse for the appalling events that unfolded in Washington, D.C. A peaceful transfer of power to incoming President Joe Biden, who won the election, legitimately, by a large margin, is essential to stabilize our democracy.

This cannot be considered from a local partisan basis that could leave our citizens in fear. A staunch resolution from our county commissioners committing to the rule of law and safety of our citizens will be welcomed and appreciated.”

Another person who wished to remain anonymous told commissioners they wondered if there is an available roster of the people who were on the ‘Stop the Steal’ bus or a list of who purchased tickets and if so, if those should be turned over to the Federal Bureau of Investigation. The person said they wished to remain anonymous because they live in a neighborhood surrounded by Trump supporters and fear for their family’s safety.