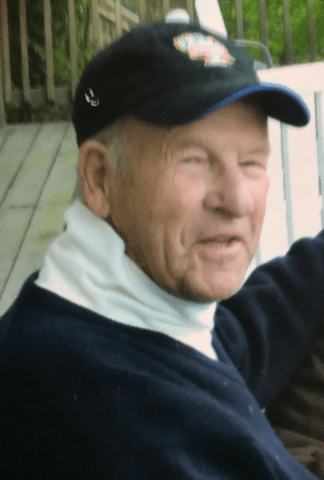 He is survived by his three grown daughters, Stephanie (resides in southern California, Marilyn (resides in Cape Cod), and Lisa (resides in

Shallotte, NC most of the year). He has four grandsons, one

The family was raised in Stony Brook, Long Island and Betty and Bob

Bob was an aeronautical engineer at Grumman Aerospace. He was most proud of working on the F-14 and on the Apollo Lunar Excursion Module (LEM).

Bob Murray’s most favorite hobby was golf and competed for decades in both New York and North Carolina.   He was a caddy throughout his

childhood and loved to reminisce about the good ol’ days in Albany, New York.

Bob received his engineering degree from Kings Point in

Great Neck, Long Island. He loved being a Merchant Marine. He was a WWII veteran with the US Coast Guard and sailed around the

world during this time.

Bob’s favorite quote was from the comedien, Jackie Gleason… “And away we go!” Smooth sailing Bob Murray.