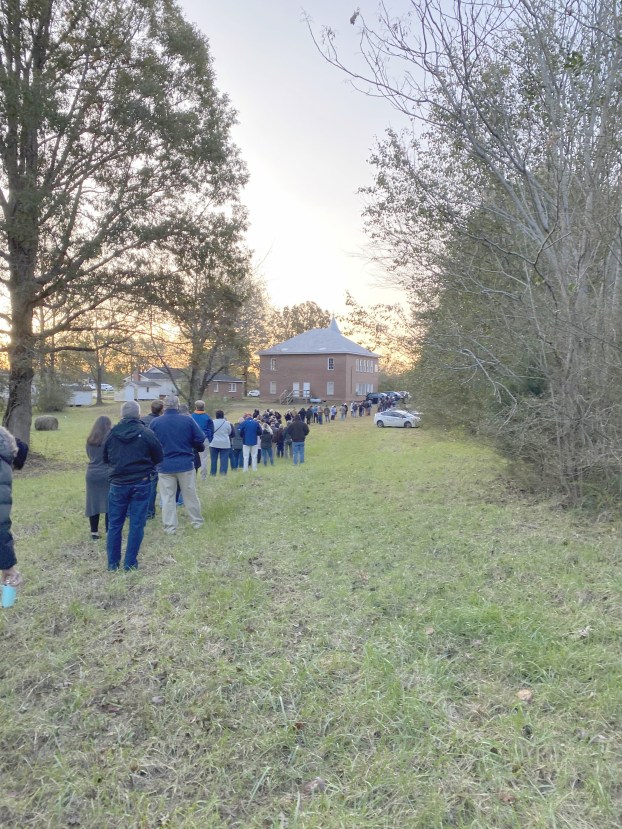 Was it worth the wait? This picture was in November of people waiting in line to vote. (Photo submitted)

published in the Bulletin in November.

POLK COUNTY—Polk County had another 25 cases of Covid-19 this week which pushed the county at over 400 cases.

As of Friday, the county had 405 cases, an increase of 25 since last week.

The county has tested 9,040 people and there are 361 presumed recovered. There were 16 tests still pending as of Friday.

There have been 12 people in the county who have died from the virus.

FOOTHILLS—The foothills area saw the remnants of Hurricane Zeta on Thursday and Friday, knocking out power and internet to thousands of people.

Duke Energy said the storm knocked out power to about 200,000 customers across a few states.

COLUMBUS—Polk County had record numbers this year with early voting and mail-in ballots, totaling 60 percent of its registered voters prior to Election Day Tuesday.

Polk voters mailed in 2,497 votes and had 7,197 people vote in-person at the board of elections office early.

Incumbent Democrat Ray Gasperson lost with 5,570 votes, which was 627 votes behind Moore.

Gibbs received 5,130 votes compared to Price’s 3,773 votes, according to unofficial results Tuesday night by the Polk County Board of Elections.

Current chairman of the board Rick Covil was the high vote getter with 7,941 votes, representing the Tryon Township. Gibbs represents the Columbus Township.

TRYON—Just after high winds knocked out power for much of the area, flooding occurred this week, closing several roads.

Polk County Schools were on a 2-hour delay Thursday because of flooding in roads, including main roads, such as Highway 9.

The area received 4.47 inches of rain from Nov. 9-Nov. 12, which is more than 2 inches what the area normally receives during the month of November, according to the National Weather Service.

(insert photo near this story)

POLK COUNTY—Polk County likely had its highest voter turnout for last Tuesday’s election with the Saluda Township turning out almost 80 percent of its registered voters.

This year’s turnout was much higher than in 2016 at 68.09 percent as well as in 2012, when 72 percent of Polk County’s voters turned out. The 2008 presidential election saw a 71 percent voter turnout in the county.

POLK COUNTY—Polk County’s District Attorney Greg Newman was disciplined last week over how he handled a rape case in 2015.

The North Carolina Bar accused Newman of failing to notify an alleged child rape victim’s parent of court updates and of making false statements about the 2015 case.

The Henderson County case in 2015 involved the indictment of James Sapp, where he was charged with the rape of a child. The case went to superior court, where Sapp was given a plea deal for a misdemeanor, according to court records.

The complaint against Newman was that the family claimed they wanted to be present during the hearing.

TRYON—There is a Go Fund Me page set up for the trucker who wrecked on I-26 Oct. 21 and was severely burned.

The driver, Charlie Culbreth, is a lifelong resident of Polk County and currently resides in Tryon. He is currently at the Augusta Burn Center in the ICU and is in critical condition.

Culbreth was driving a tanker truck on Oct. 21 West on I-26 near Saluda when the truck overturned and spilled gas, caught on fire and exploded. He suffered severe 3rd degree burns to more than 40 percent of his body, mainly to his face, head, back, arms and hands, according to Sally.

Polk County High School will be moving to remote-only classes for students through the start of the Thanksgiving break.

School and district officials understand that this schedule change is inconvenient for families, but this decision was made to ensure the safety of students and staff.

Cannon has been with the city for 5 years and was its first manager. Prior to Cannon, the city had an administrator form of government.

Cannon submitted his resignation on Tuesday after accepting a job in Oregon.

He will continue to work until Dec. 22, with his resignation effective on Dec. 31.

Residents along the 3.5 stretch of Houston road that runs from Skyuka Road in Columbus to Highway 108 in Mill... read more