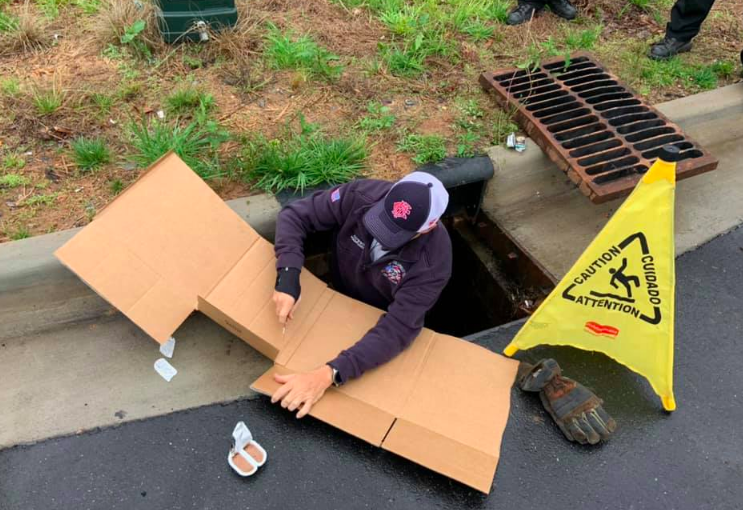 published in the Bulletin in May.

COLUMBUS—Columbus officials took a break from their regular duties this week to rescue a kitten that was stuck in a drain.

The kitten was discovered behind the Bojangle’s in Columbus on Wednesday. Both the Columbus Police Department and the Columbus Fire Department assisted in the rescue. Michael Herman got into the drain and rescued the kitten.

SALUDA—While the trail at Big Bradley Falls in Saluda has been re-opened from the COVID-19 pandemic, the waterfall and overlook has been restricted.

The North Carolina Wildlife Resources Commission designated the falls and overlook portion of the trail as restricted and people can only access the area with written permission.

North Carolina Governor Roy Cooper announced the $85.4 million in federal funds for COVID-19 relief on Tuesday, with the funding to be disbursed this week to counties.

TRYON—Alcohol is once again allowed on the Tryon downtown sidewalks.

The Town of Tryon announced this week it rescinded its previous suspension of town ordinance 111.03, which allows alcohol consumption on the sidewalk in the downtown district of North Trade Street.

MILL SPRING—Polk County announced over the weekend that E. coli was found at the Lake Adger marina.

Polk County Manager Marche Pittman said the county was notified on Friday that Mountain True had performed an independent test at the marina and discovered an unusually high level of the bacteria Escherichia coli, or E. coli in the water.

COLUMBUS—The 58th annual 4th of July celebration in Columbus will not be held this July.

Columbus Town Council met during a Zoom meeting Thursday and decided to postpone the festival until Oct. 3. The town later cancelled the festival because of state restrictions on public gatherings.

POLK COUNTY—Polk County’s COVID-19 cases remained at 35 all week, with 4 deaths and 9 people being released from isolation.

All 4 deaths have been in the Saluda zip code, according to the North Carolina Department of Health and Human Services.

A national website has once again ranked Polk County Schools as one of the top districts in North Carolina.

Niche.com’s proprietary rating system has listed Polk County Schools as the second-best school district in the state in its 2020 rankings, trailing only Chapel Hill-Carrboro Schools.

FOOTHILLS—Rain came back with a vengeance this week a day after the 2-year anniversary of catastrophic rainfall in the Pacolet Valley.

Tryon received 5.85 inches of rain on Tuesday, according to the National Weather Service, which is more rain than the area normally receives for the entire month of May.