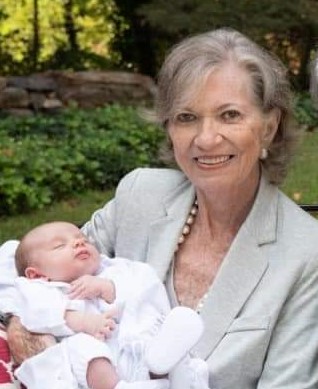 When Anne H. Wallace was born in Knoxville, Tennessee, to Betty and Charles

Wallace, she had no idea the surprises life held in store for her. One of the first was

the arrival of a little sister, Josephine (Jody), a close friend and ally to this day. After an uneventful youth, and as a loyal Volunteer, Anne made her way to the University of Tennessee. With a lifelong passion for politics, Anne migrated from UT to Washington, DC, where she began her “political career” working initially for Congressman John J. Duncan, Tennessee. However, her career grew along with her passion, and after eight years she was Legislative Assistant to Senator Bob Dole. As a young single woman in DC in the late 1960s and early ‘70s, she and her roommates worked hard during the day and made the rounds of political events in the evenings. She even remembers playing tennis on a court next to a young Joe Biden. Her life was vibrant, exciting, and rewarding. These same friends were shocked and disbelieving when Anne announced that she was leaving DC to become the wife of the Reverend Hayden Britton – a Presbyterian preacher in Pittsburgh – where she would embrace the role of preacher’s wife and become part-time mother and friend to his three mostly grown daughters, Laurie, Lynn, and Lisa. The excitement, vibrancy, and rewards remained, but the focus changed as she took on the challenges of church work, joining every group that would

have her, and entertaining congregation members. Before long, another daughter

joined the sisterhood – Mary Hayden. Anne remembers their home in Pittsburgh as a special gathering place for old and young alike. The big porch was a haven for the older girls as they and their friends were always welcome there, no questions asked. One time in the middle of the night, Anne wandered into the kitchen, and a strange boy rummaging through their fridge looked up at her. “Who are you?” he asked. “I live here,” she replied, “Who are you?” and promptly sat down to talk with him before she returned to bed. After ten years in Pittsburgh, God called them to a church in Kinnelon, New Jersey, located only thirty miles west of New York City. Always willing to sacrifice for the church, Anne and Hayden journeyed with congregation members to NYC for theater, concerts, and fine dining. (And maybe shopping, too). She volunteered at their church for Willing Hands, a work program for adults, and served at president of PEO, a philanthropic organization that raises money for deserving women. She still found time to entertain church members and friends with warmth and grace, and wherever Anne went, she left a trail of friends.

After fourteen years in New Jersey, it was time for Hayden to retire. Because two

daughters lived in Flat Rock, NC, Anne and Hayden began to explore the area for

their next move. As have so many people before her, Anne had enjoyed her riding

experiences in Tryon, so she suggested they look in Polk County. They moved to

Tryon in 2002 where they found a caring community in the foothills of Western North Carolina. Hayden may have retired, but he had other plans for Anne. The dust had barely settled from their move before he offered her services as Clerk to the County Board in Columbus. Not one for traditional channels, he met a stranger at the gym who was looking to hire. Reportedly, Hayden replied, “You need to hire my wife. She’s perfect for that job.” Anne credits the patience from years of being a minister’s wife and her experiences in DC with giving her the gravitas to do this job for eight years with wisdom and grace and a sense of humor before retiring – for good – in 2010. Throughout her forty-two years with Hayden, they have traveled all around the world; she has entertained friends and acquaintances, at small gatherings and large. She has loved nothing more than to sit with long-time friends or new and hear the latest or learn more about them. Anne has always had a ready, gentle smile, a listening ear, and a word of kindness for everyone in her life. Most recently, her favorite pastime has been to hold the newest member of the family, their grandson Hayden Wallace. Her greatest accomplishment has been as a minister’s wife to Hayden Britton. She has been unofficial manse hospitality chair, confidante, greeter extraordinaire, and friend to congregations in three states. “I loved every minute of it, even the challenging times. God finds interesting ways to help us grow.” Anne Wallace Britton passed away peacefully at home on Friday evening, December 11, 2020. The last months have been difficult. Anne and Hayden offer many thanks to the members of their extended family and the community who have joined them in fond memories and laughter, in treasured tales – some best forgotten, and in kindnesses so readily offered. Anne loves you all. “It’s been a great life.” A private burial will be held at the Britton family cemetery in Flat Rock, North Carolina. Memorial gifts may be made to the Founder’s Fund at Tryon Presbyterian Church, 430 Harmon Field Road, Tryon, NC 28782 (www.TryonPresbyterian.org) or to The Foundation for St. Luke’s Hospital (slhfoundation.org) An online guest register is available at www.mcfarlandfuneralchapel.com