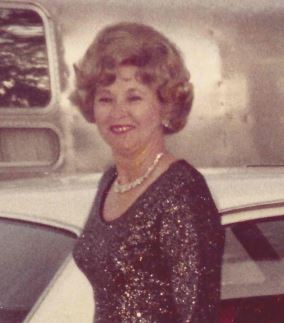 TRYON, NC – Joyce Edney Huntley was born September 5, 1926, in Tryon, N.C., to the late James M. and Helen M. Edney, and died on November 22, 2020 at age 94 in Dunedin, Florida. She graduated from Tryon High School as Valedictorian in 1945 then moved to Washington, D. C. to work for the Federal Housing Authority (HUD). She married Paul S. Huntley on February 2, 1947 and lived in Silver Spring, MD.  The Huntleys retired in 1979 and relocated to Clearwater, FL.

Over the years, Joyce and Paul both became private pilots, were members of the AOPA and owned their own plane. They later purchased acreage for a weekend retreat near Capon Bridge, WV. Her hobbies included travel, card games, and puzzles of any kind.  Her passionate avocation became genealogy, where she did over 40 years of extensive research and documentation of her family lineage. She was a member of both the DAR and the Mayflower Society. In 1994, Joyce went out on her own and lived 17 years with her partner Bill Dolby of Waterloo, Ontario,Canada, until his death in 2012. Joyce is survived by her daughter Holly Huntley Stiegel (Craig Stiegel) of Columbus, GA., and 3 grandchildren: Kimberly Stiegel (Robert Kelly Adams) of Dawsonville, GA, Kelly Stiegel, M.D. (James M.Barry, III, M.D.) of Houston, TX, and grandson Raiden B. Stiegel of Atlanta, GA. She doted on her grandchildren and revelled in their many accomplishments and talents. Joyce, the oldest of 10 that survived until spring, 2020, is survived by 8 siblings: Marjory Sichert,Indianapolis, IN, Doris Lehoskay (Andy), Carl Edney, Carroll “Boonie” Edney (Teresa), Douglas Edney, James Edney (Judy) all of Tryon, NC, and Shirley Harris (Arthur) and Bonnie Pendleton of Sebastian, FL.Joyce is pre-deceased by one sister, Mary Lee Lindsay and is also survived by a number of nieces and nephews.