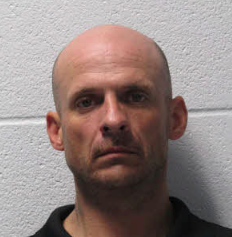 Timothy Mark Ritch, 38, of Easley, S.C.  was arrested and charged with trafficking in methamphetamine by both possession and transportation; possession with intent to sell and deliver methamphetamine and maintaining a vehicle for the purpose of controlled substance use, according to sheriff’s office reports

The arrest occurred on Sept. 9 after Polk deputies received a complaint of a suspicious vehicle in the area of Claude Gilbert Road.

When deputies arrived they found the vehicle parked in a driveway and upon running the tag discovered that the vehicle was reported stolen out of Spartanburg County, according to sheriff reports.

Special Operations Division ACE Team deputies attempted to stop the vehicle as it left the driveway and the driver failed to stop. Ritch led deputies on a short chase. Ritch failed to stop at the intersection of Chesnee Road and Melvin Hill Road and crashed into a house and motor home, according to sheriff reports.

Ritch led deputies on a short foot chase after the crash before being apprehended.

The sheriff’s office says Ritch had 61.5 grams of methamphetamine in the vehicle, along with scales and unused bags, as well as drug paraphernalia in his possession.

Polk County Sheriff Tim Wright said the caller was an off-duty reserve deputy who stays alert and protects his community even when he is not on the clock and thanked him for remaining vigilant.

“Deputy Johnson and Sgt. Kujawa of our ACE Team did an outstanding job of conducting surveillance, maintaining their composure during the vehicle pursuit and in chasing down this offender when he tried to flee on foot after endangering lives and property with his reckless actions,” Sheriff Wright said.