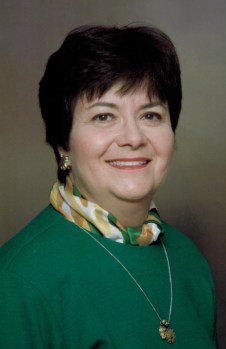 Peggy grew up in West New York, New Jersey, attended Holy Name School of Nursing in Teaneck, New Jersey and then went out to St. Louis University in Missouri to attend college.  It was in St. Louis where Peggy met the love of her life, Tom Jaski, and they were married in 1968.  The couple moved from St. Louis to Connecticut, then to Montgomery, Alabama and settled in Rutherfordton in 1973.  A definite change from her hometown, Peggy loved Rutherfordton and over five decades, the Jaskis put down lasting roots and made wonderful friendships.  During the course of her career, Peggy taught nursing at Gardner-Webb College, worked at Rutherford Hospital in the medical records department, and retired as the Health Care Coordinator for Rutherford County’s Head Start program.  She would say, however, that her most rewarding job was that of wife and mother.  Peggy was very involved in the community and her volunteer activities ranged from Women’s League, the Garden Club, Ladies Guild at her church, PTA and parent volunteer and many, many more.  She and Tom were also active members of the Immaculate Conception Church in Forest City.  Since 2017, Peggy had been a resident of Tryon Estates in Columbus, North Carolina and enjoyed her community there.

She is survived by her children, Tom (Christy) Jaski, David (Magee) Jaski and Kim (Scott) Williamson, as well as sister Carol Sgombick.  Peggy was the extremely proud grandmother and Nana to her 10 grandchildren — Lucy, Lauren, Anna Claire, Lily, Ben, Will, Chase, Caroline, Matthew and Katie.  Peggy lived a life centered on her faith, her family and her friends and she will be dearly missed by all.

Given the current pandemic, the family is postponing a Celebration of Life for Peggy until a more appropriate time.  Those desiring to make a memorial contribution in her honor are encouraged to consider St. Jude Children’s Research hospital at 501 St. Jude Place, Memphis, TN 38105 or stjude.org/donate.

“When we are gone and people weep for us and grieve, let it be because we touched their lives with beauty and simplicity.   Let it not be said that life was good to us, but rather, we were good to life.”  Jacob P. Rudin

Online condolences may be made at www.crowemortuary.com.