Don’t let the gray fool ya 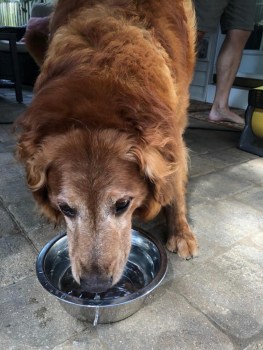 There are few things that strike fear in me as much as seeing a picture of my Golden Retriever, Sage, on the Neighborhood Facebook page. I have never posted a photo of him, therefore, it is always one of my neighbors who has found him in their yard. It had been a while since he “flew the coop”, but recently, he has rekindled his passion with fence jumping.

I thought we had grown out of this stage. Sage, the perpetrator…I mean Golden Retriever, is almost ten years old. Gray is taking over his once red face and he makes a few more groans when getting started in the morning. I’ve been calling him an old man for the last few months since he seemed to be calming down.

Sage, the old man, found his source of youth when the morning lows dipped into the low sixties. I noticed a pep in his step during our morning walk a couple weeks ago and thought nothing of it. Then a day later I received a message from a friend that stopped by our house to walk our neighborhood trail.

We were out of cell phone range at the time, but the message he left was classic.First, he said Sage can jump way too high for a dog his age. Seeing a nine year old dog jump a five foot fence is a sight to behold. Unfortunately, you can’t reflect on it, because Sage starts showing off his speed. With a look of unparalleled delight, Sage sprinted back and forth past my buddy and showed no signs of stopping.

On the third pass, my buddy who happened to be a linebacker, used his textbook tackle technique to wrap up Sage and carry him back into the fence.

I was hoping this was a one time thing. Maybe Sage was just seeing if he could still jump the fence and would be satisfied with this one foray. Nope.

I got a text from my wife last week that read, “Have you checked Facebook?…your dog is the worst”.

Opening up the app on my phone I see Sage drinking water out of a bowl at someone else’s house. My wife goes on to tell me that Sage had another adventure. After jumping our fence, he jumped a fence three houses down for a water break. The homeowners then took his picture and posted the evidence. My wife went down to their house to retrieve our retriever.

Upon arrival, she was informed that Sage had jumped their fence, and the next two fences. He was last seen running uphill and not looking back. A few blocks away my wife found Sage and walked him back to his jail cell, also known as the laundry room.

As annoying as it is to have his white and red face posted on social media by others, there is a part of me that smiles because he still has that youthful drive. From now on, when anyone comes to pet Sage I always warn them. Don’t let the gray fool ya. I can only hope people say that about me one day.