Impound lot being cleaned up 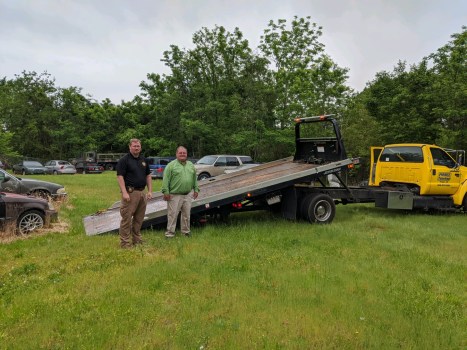 The Polk County Sheriff’s Office and Town of Columbus are partnering to clean up the former county impound lot on Simms Street in downtown Columbus. The impound lot has been an eyesore for Columbus residents for many years. (Photo by Nicki Pierce)

The lot is located along Simms Street in Columbus, behind the former Polk County Jail.

The impound lot has been an eyesore for many Columbus residents in the surrounding area downtown for nearly 30 years. Sheriff Wright said he decided it was time to clean up the lot.

“On behalf of the Town of Columbus I would like to thank sheriff Wright for the removal of the junk cars inside the county’s impound lot,” Mayor McCool said. “I am confident that the residents, particularly those on Simms Street are thankful to see these vehicles towed away.”

The cars in the former impound lot are being sold as scrap metal. Sheriff Wright said he first learned of the issue about 18 months ago and has worked to rectify the situation in downtown Columbus.

“We were glad to resolve this problem after 25 years,” Wright said. “Problems like this should not take years to fix.”

Vehicles that are impounded now are stored at a lot at the new sheriff’s office, located just outside Columbus. The county built the new law enforcement center and jail a few years ago. The county plans to renovate and use the former jail for administrative offices.