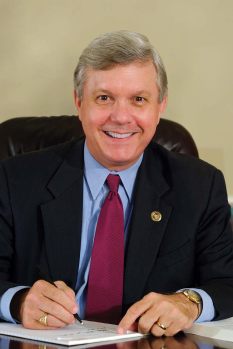 Walter Dalton to step down in February 2021

Dalton, whose contract runs through June 2021, told trustees his decision was motivated by the desire to spend time with family.

“At that time, I will be approaching my 72nd birthday and I want to enjoy as many springs as I can and enjoy them with my family, who have stood beside me and behind me through every phase of my professional life as an attorney, an elected public servant, and as an educator,” Dalton wrote to the trustees.

The Board of Trustees will meet on Tuesday, July 7, and are expected to plan the timeline and process for hiring a new president.

“I knew I was going to get that letter one of these days,” said Chairman Roger Jolly, “While it wasn’t a shock, I just wish he’d stay a little longer because he has done such a terrific job for our community, our students, our employees and our trustees. His devotion and commitment to Isothermal have been so valuable. He will be sorely missed, and we have a big job ahead of us to fill his shoes.”

“I’m glad he will be here until February and the college can continue to benefit from his leadership,” said Jolly.

Dalton, the college’s fifth president, has built a strong legacy in his seven years of service.

“As I reflect, I am proud and pleased with the accomplishments of the Isothermal family during my time in your service,” Dalton wrote to the trustees. “Several new programs have been implemented, such as the RIBN program with Western Carolina University; the equine studies which have been created, the program in dental assisting; hospitality and culinary initiatives; iTECH; and the Global Distinction program, to name a few.

“We have received a record number of grants through ARC, USDA, USEDA, The Stonecutter Foundation, the Golden Leaf Foundation, Z. Smith Reynolds, the Cannon Foundation, Farm Credit, The O. Max Gardner Foundation and others. This, together with local support, has resulted in the construction of the Engineering, Technology and Workforce Development Building, the Agribusiness Complex, new chemistry labs, campus beautification, and new equipment and technology. With the support of the Rutherford and Polk County commissioners and state bond funds, we have been able to make much needed roof and HVAC repairs. These investments should serve the college well for years to come.”

Dalton noted some other accomplishments during his tenure.

Dalton gives credit to the college employees and trustees for all of these successes.

“In this and all things mentioned, it took a team effort and the devotion and dedication of our faculty and staff is unparalleled,” Dalton said.