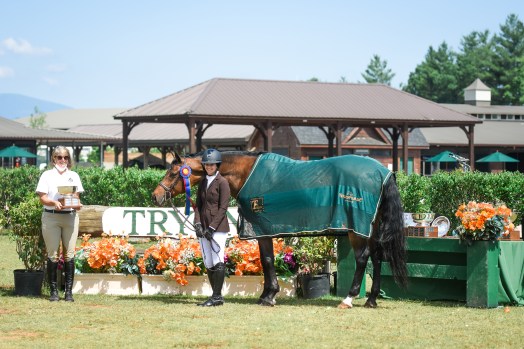 It was an event that almost didn’t happen!

In spite of strict pandemic restrictions, the 2020 edition of the Tryon Riding & Hunt Club (TR&HC) Charity I Horse Show was a huge success even without spectators cheering the riders on.

As Covid–19 shut down the country in mid-March, the United States Equestrian Federation’s (USEF) followed suit as all USEF sanctioned horse shows came to a screeching halt. “When we were given the green light to go ahead with our historic show we were thrilled,” says Angie Millon, TR&HC vice president and committee chair of the Charity Shows. “However, we were also concerned as the list of precautions and restrictions from the local and state governments and USEF were a little daunting.”

The guidelines included no spectators, mandated social distancing, masks, temperature scans, no ribbons awarded at the ring, no traditional jogs and an all online touch-less experience. “This is going to be the new normal for at least awhile,” Millon continues. “We were all so happy to get back to a horse show, I think for the most part, everyone was willing to give it a try!”

Approximately 700 horses from all over the United States competed over the five-day horse show.

The Grand Prix included horse and rider combinations from nine countries competing for the $75,000 prize. Leslie Burr-Howard and Donna Speciale topped the 45 entries that contested the Michel Vaillancourt course. The big hunter highlight of the week was the $50,000 International Hunter Derby. In Writing, ridden by top derby professional Kelly Farmer, bested the field of 22 horses. Normally a two-round competition, the class had to be called after the first round due to severe weather that rolled in as the second round was set to start.

In keeping with the TR&HC tradition, local charities each received donations from the TR&HC. This year’s recipients are Polk Equine Emergency Rescue, Guiding Reins and the Thermal Belt Outreach Ministry. “This year, each charity received a check for $2,000. Over the years the charities have changed, but the tradition of giving back to the community has never wavered,” says TR&HC president Terry Lynch.

“Although this year our show didn’t have its trademark hospitality, ice cream socials, parties and get-togethers, we all look forward to a “return to normal” sometime in the near future.” says Millon.