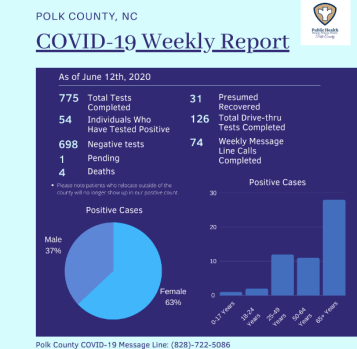 The county had slowed and not had any new cases for about a week and a half, then had 16 new cases last week, going from 35 to 51. Late Friday another 3 cases were added.

The county as of Monday had 31 cases presumed recovered and remains at 4 deaths.

There have been a total of 775 total tests completed, including 698 negative tests.

There was 1 test pending as of Friday.

Polk County is doing drive-thru testing with free testing being offered on Wednesday with an appointment. The testing is being done at 40 Ward Street, Columbus.

The county has completed a total of 126 drive-thru tests and completed 74 weekly message line calls.

Most of the county’s positive tests have been female at 63 percent. Male positives are at 37 percent.

The majority of positive tests have been of people aged 65 and over at almost 30 of the positives.