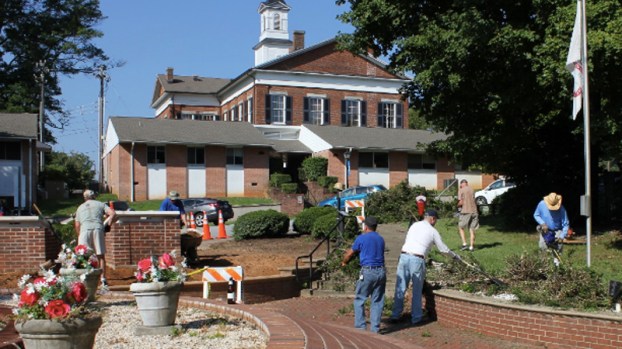 Polk County’s Charters of Freedom is nearing completion with a successful volunteer workday on Aug. 17. More than a dozen people did preparation and landscaping work. Another workday is planned for Saturday, Sept. 7. (Photos submitted by Robert Williamson)

Another workday scheduled for Saturday, Sept. 7

COLUMBUS—Thanks to more than a dozen volunteers who did landscaping at Veterans Park recently, Polk County’s new Charters of Freedom is nearing completion.

A new workday is planned for Saturday, Sept. 7, with volunteers needed. The next workday will be from 9 a.m. to noon for the final preparation, including raking/leveling, soil, mulching, planting and cleaning up Veteran’s plaza.

The last workday was held on Aug. 17, where volunteers removed old shrubs, dug rain trenches, picked up rocks and bricks, removed pallets and did general clean up.

The Town of Columbus provided a dump truck and front loader.

Foundation Forward Inc. decided to donate the Charters of Freedom to Polk County last year. The county and town of Columbus have worked together for the location of Veterans Park, which was recommended after some study by the Polk County Appearance Commission. No county or town dollars have been spent on the displays of the Declaration of Independence, the U.S. Constitution and the Bill of Rights. The displays are said to be constructed to last for 300 years. Several donations have been made for the project, including from Statesville Brick Co. for the bricks, Henson’s Lumber for the mortar cement and sand as well as donated masonry labor. Volunteers also recently completed heavy lifting of the top frames for the displays.

A dedication ceremony for the Charters of Freedom is scheduled from 1-3 p.m. on Tuesday, Sept. 17 at Veterans Park.

Cause is still under investigation LANDRUM—A fire in Landrum Monday afternoon had several departments respond to put it out.  The... read more