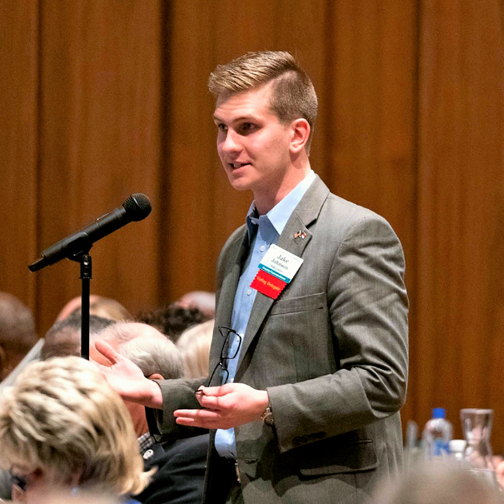 Johnson gets started in Raleigh

Johnson served as a Polk County Commissioner since 2012 and resigned on Monday to accept the appointment in the North Carolina House of Representatives District 113.

During the general assembly session on Monday, Johnson was escorted to his seat n the house chambers and his proclamation was read by Speaker of the House Tim Moore.

“I look forward to working with the citizens from District 113, the local officials of the counties and my fellow members in the General Assembly to develop and pass meaningful legislation out of these committees that will represent the interests of western North Carolina,” Johnson said this week. “As I begin my work in the legislature, my priorities and conservative principles remain the same: to stand for pro-Christian, pro-business and pro-family values.”

Johnson was appointed last month to serve out the term of former representative Cody Henson, who resigned in July. Johnson was sworn into office during a special Polk County Board of Commissioner meeting on Monday morning by Superior Court Judge Peter Knight. The board of commissioners accepted Johnson’s resignation. The Polk County Republican Executive Committee has been asked to nominate a replacement commissioner to fill out Johnson’s term, which ends in 2020. Johnson had already announced he would run for the District 113 seat prior to being appointed.

Who entered the race?

Registration to run for Landrum Council is over   LANDRUM—The deadline for filing for the upcoming municipal election for the... read more