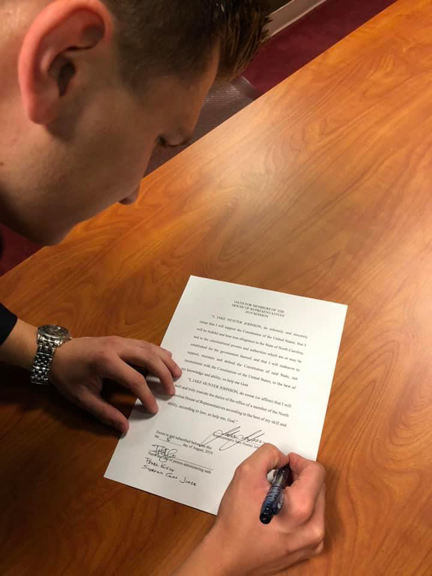 Commissioner Jake Johnson officially submitted his resignation Monday afternoon after being appointed to the North Carolina House of Representatives District 113. Pictured is Johnson signing paperwork after being sworn in as the representative. (Photo from Jake Johnson for NC State House)

Republican Party has 30 days to make a replacement recommendation

COLUMBUS—Polk County Commissioner Jake Johnson officially submitted his letter of resignation this week to go to Raleigh to represent District 113 in the North Carolina House of Representatives.

Johnson was elected as one of the youngest commissioners in the state in 2016, was the high-vote getter that year and served as chairman his second year as commissioner.

He was appointed last month as the North Carolina District 113 Representative, which serves Polk, Transylvania and part of Henderson counties. Johnson (R) will serve out the term of former Representative Cody Henson (R), who resigned last month after pleading guilty to cyberstalking.

The Polk County Board of Commissioners held a special meeting Monday morning to accept Johnson’s resignation. He later went to Raleigh and submitted his official resignation in writing, as well as county attorney Jana Berg submitting a letter to the Polk County Republican Headquarters in order to replace Johnson as commissioner.

“It has been my honor and privilege to serve as your county commissioners since 2016,” Johnson said in his letter of resignation. “I am extremely proud of the things this board and this community were able to accomplish. Although I am sad to leave my current role, I will continue to serve this county in my new role as your North Carolina State House Representative. I am looking forward to all we can accomplish together in the future.”

Berg said to the Republican Chair that Johnson’s resignation as commissioner was effective Monday and creates a vacancy on the board.

She said North Carolina General Statute 153-27.1 provides how Polk County is to fill vacancies occurring on the board of commissioners.

“If the member who vacated the seat was elected as a nominee of political party, the board of commissioners, the chairman of the board, or the clerk of superior court, as the case may be, shall consult the county executive committee of the appropriate political party before filing the vacancy, and shall appoint the person recommended by the county executive committee of the political party of which the commissioner being replaced was a member, if the party make as recommendation within 30 days of the occurrence of the vacancy,” states the statute.

Berg said the county seeks the advice and recommendation for filling the vacancy created by the resignation of commissioner Johnson.

“Please not that should you choose to make a recommendation, it must be made within 30 days of Aug. 5, 2019,” Berg said.