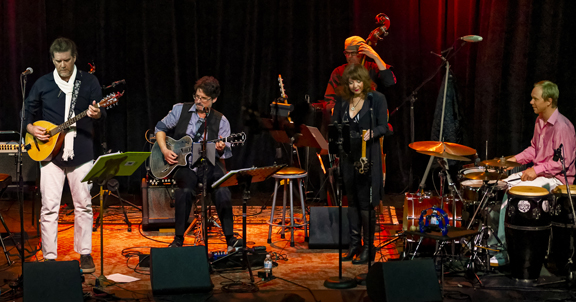 The Bridge: Paul Simon meets the Beatles to perform at Summer Tracks August 9

Peggy Ratusz and Jonathan Pearlman started working on this special show several years ago when they realized that with all the tribute shows out there, no one had done much with The Beatles’ or Paul Simon’s work (other than copy their songs verbatim). So Pearlman created arrangements of their favorite tunes, including some of their more obscure titles. And Ratusz tested them out during their many acoustic shows together.

Encouraged by the applause they received, they decided to put these classics together in a show they call, The Bridge—a nod to Perlman’s arrangements bringing together The Beatles’ rock and roll aesthetic and Simon’s acoustic sensibilities.

On Friday, Eric Congdon will join them, adding guitar and vocals. Grant Cuthbertson will be on upright bass, Eric McIntire on electric violin, and Michah Thomas on drum kit and percussion.

Peggy Ratusz has been a favorite of Summer Tracks for years. Organizing and performing tributes to artists such as Linda Ronstadt and Bonnie Raitt. The Bridge promises to rank right up there in popularity with the Summer Tracks’ crowd. In addition, because the concert date coincides with the 50th anniversary of Woodstock, concert-goers are asked to dress in their favorite tie-dye.

Concerts are free to everyone. The show will begin at 7:00 p.m. In case of rain the concerts will move across the street inside the spacious Tryon Fire Department.

For more information about Summer Tracks and the performers visit www.summertracks.com.

PCHA on the road again August 8

The Polk County Historical Association is taking its monthly meeting on the road again. This time it will be in... read more